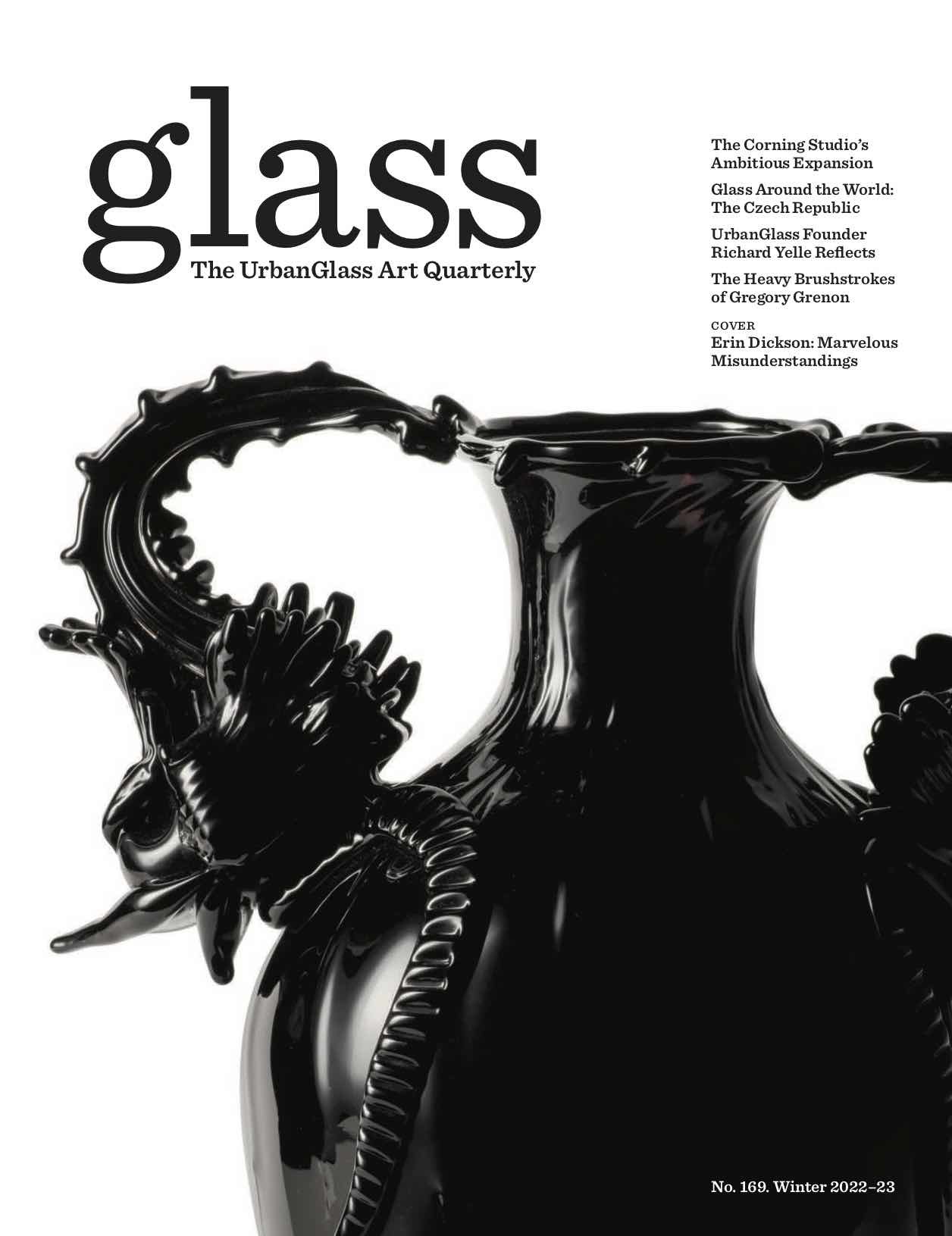 The Winter 2022 edition (#169) of Glass: The UrbanGlass Art Quarterly is in subscriber mailboxes and newsstands. On the cover is a striking image of an unusual handle from an attempted replica of an antique glass vessel. The mistakes were the result of the language barrier between British glass artist Erin DIckson and the Italian maestro she was working with in Murano.

This misunderstanding inspired Dickson to start an international project that explored cultural differences, the global network of glass artists, and what gets lost in translation. Using Google Translate, each artist described the work they did in their own language, processed it into the next artist's language using the machine translation, and so on, until 16 artists' work were amassed by Dickson, who assembled the work into a museum exhibition at the Glasmuseet Ebeltoft in Denmark, from where it traveled to its current gallery space at the Glazenhuis in Lommel, Belgium, where the project was on view until October 2022.

The Winter edition also features UrbanGlass co-founder Richard Yelle's definitive account of how the New York Experimental Glass Workshop evolved into UrbanGlass on the occasion of the 45th anniversary year. While Yelle's perspective has been documented in past articles in this magazine, this is the first time the full story is told entirely in his unique voice, and with his perspective on the New York City glass art scene he helped to establish when New York Experimental first opened its doors in 1977.

The Corning Museum of Glass has been undergoing an ambitious series of expansions since executive director and president Karol Wight took the helm in 2011 and led initiatives such as the construction of the Contemporary Art + Design Wing and a total overhaul of the museum's digital offerings. Now it is time to focus on expanding the Corning Studio, which is planned to reopen in late 2024 in an enlarged building that will grow from 24,000 to 60,000 square feet, and add a world-class casting facility to its arsenal of hot-glass studios, kiln and flameworking facilities. Through exclusive interviews with Wight, Studio director Amy Schwartz, and senior programs manager Richard Whiteley, Glass presents the most in-depth look at Corning's bid to launch a new two-year educational certificate program, become an international center for large-scale glass casting, and make its residency program a year-round operation.

For the entire year of 2022, Glass has been honoring the United Nations' declaration of the International Year of Glass with a series called "Glass Around the World." Our final dispatch is from the Czech Republic, where contributing editor Emma Park chronicled how the glass field is evolving in the decades since the end of the Soviet period, with a particular focus on some of the most innovative artists and designers building on the long legacy of skill and technical expertise to take Czech glass into new territory.

Our fifth feature is an examination of the career of the late Northwest Coast art star Gregory Grenon, who passed away earlier this year. A reverse painter on glass, his distinctive use of the luminous effect of glass as a canvas lent special power to his stylized portraiture, as investigated in Gayle Clemans' feature article.

Finally, we present our annual guide to the glass educational programs and suppliers to the field, an in-depth guide to everything glass artists need to advance their career. This is the most authoritative listing of degree-granting, and open-access glass educational programs not only in the United States, but around the world. Similarly, we have gathered the most comprehensive listings of suppliers to glass artists to make it easy and efficient to locate the materials and tools needed to create glass art.

All this, plus five reviews, an essay on the struggles of the first female-owned glass studio in Murano, and important news about exhibitions and events in the field.

Not a subscriber yet? Don't miss a single issue! Subscribe today.