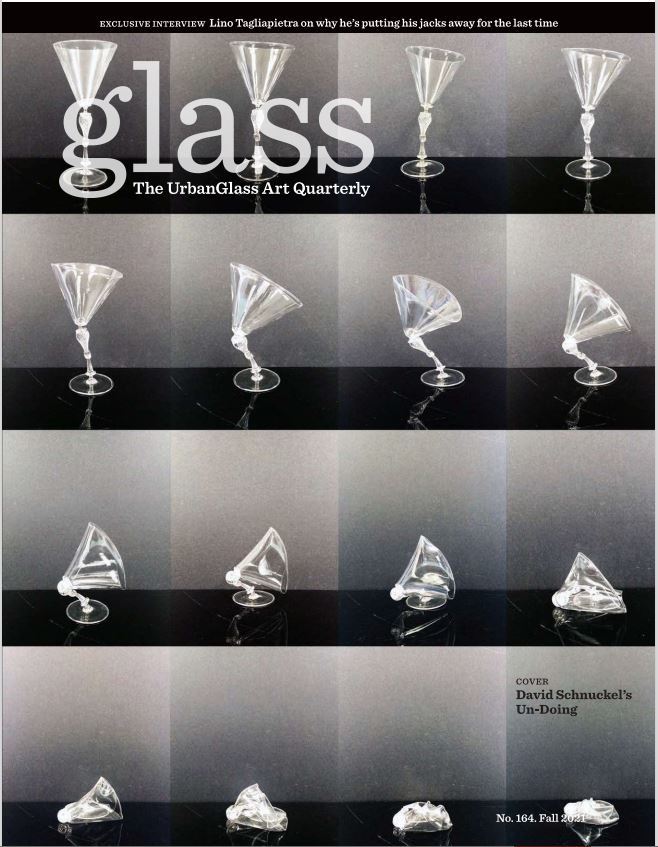 The Fall 2021 edition of Glass: The UrbanGlass Art Quarterly (#164) is hitting newsstands and subscriber mailboxes. On the cover is a time-based work by David Schnuckel, an epic story told in 16 panels. Like a graphic novel, it records a decay sequence as an expertly created wineglass made by the artist is subjected to the intense heat of the kiln, which causes it to deform, collapse, and end as a shriveled silica mass. Rich with metaphor for the lifecycle, it was chosen as fitting for the season of harvest, and for its challenge to the tendency to fetishize technique in glassmaking. Schuckel's work is highly original, takes advantage of new technical opportunities thanks to a high-temperature camera setup at Corning, and revels in the artist's interest in provocation and deconstruction.

Flameworking pioneer, prolific author, and acknowledged maestro Paul J. Stankard contacted me several months ago to tell me needed to write about Carmen Lozar, whose work he felt had developed to become some of the most technically accomplished at the torch. He was particularly struck by Lozar's ability to tease convincing anatomical form, and to apply it to resolved compositions that offer commentary, observation, and connection to viewers. Knowledgeable about all types of flameworking, Stankard contrasts the machismo that can sometimes be associated with pipemaking with Lozar's approach, and he locates her in the academically trained camp bringing more subtle expression to glass shaped at the torch. His article "The Fabulist" dissects Lozar's "depths of feeling and fluidity" to create works that are "at times autobiographical, other times universal, and often both."

Regular contributor Emma Park traveled to Venice to investigate "The Glass Ark," the title of the latest exhibition by the always-impressive Stanze del Vetro. While some dismiss the artistry behind the often-whimsical glass animals plied in small shops in Murano and Venice, esteemed curator and former Louvre Museum director Pierre Rosenberg found them not only worthy of attention, but amassed his own private collection of over 2,000 examples during his many trips to and from his apartment in Venice. Park, a savvy observer, writes of Rosenber's obsession: "It is almost as though he could not resist the pleasure these animals gave him, but did not entirely approve of it." The lavish illustrations accompanying the article show the remarkable range of glass and how it can mimic the distinctive forms found within the animal kingdom.