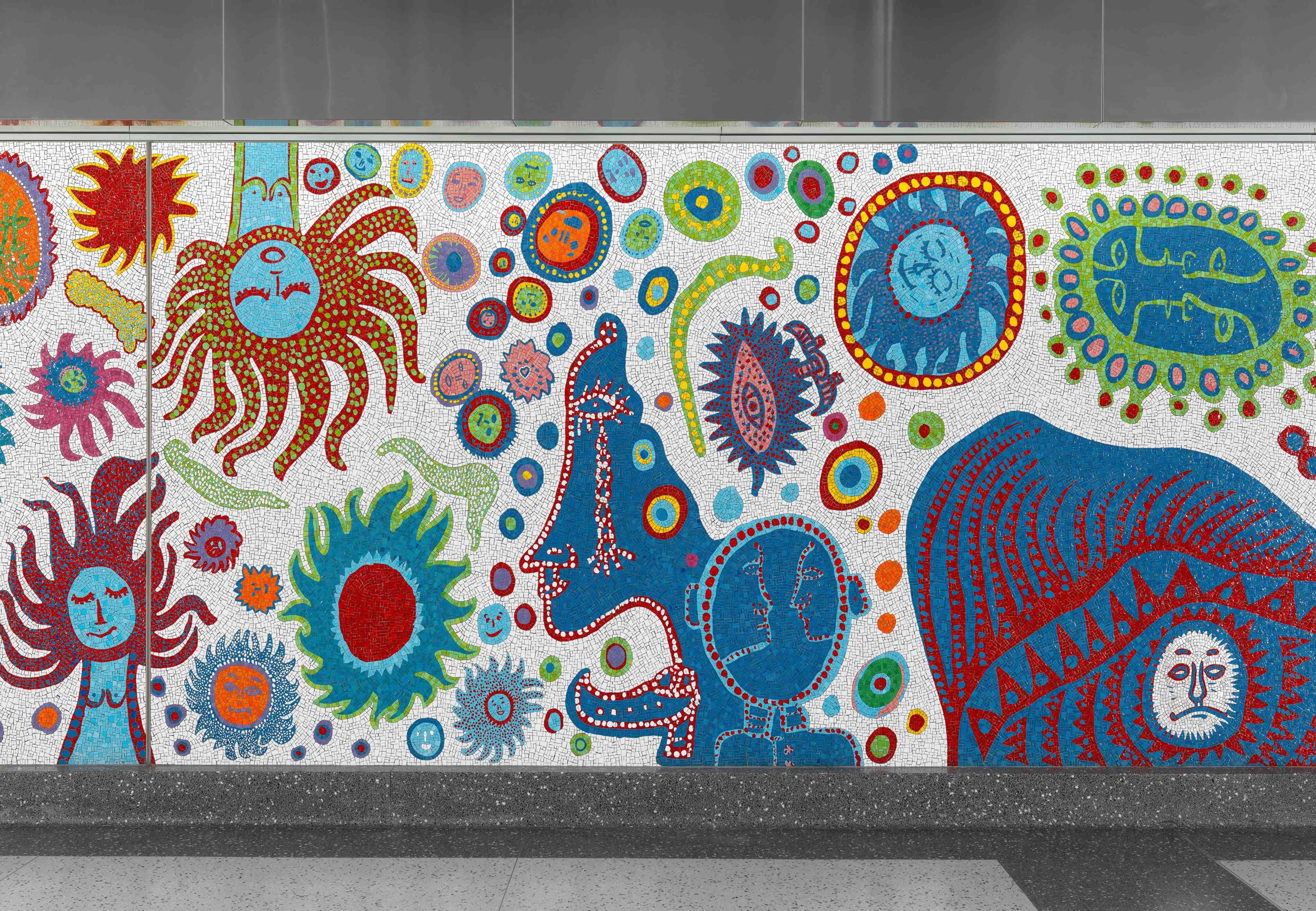 Though the exact opening date has not yet been released, the long-awaited Madison Terminal will open soon to Long Island Railroad passengers looking to go directly from Grand Central Terminal to points East Essentially, a new two-level, 700,000 square-foot station has been excavated from the earth below the existing historic Grand Central train terminal, the subterranean expanse will be brightened by multiples glass mosaics by Yayoi Kusamaand Kiki Smith. Though glass artwork, including mosaics, have long graced the walls and tunnels of New York City's subways, it is rare for the Metropolitan Transit Authority's Arts & Design program to commission multiple works by a single artist, as was done in the case of Kiki Smith's five large-scale mosaics of naturalistic scenes, some featuring bodies of water in the New York City region.

Kusama designed a 120-foot-long piece titled A Message of Love, Directly from My Heart unto the Universe as an extension of her ongoing project “My Eternal Soul”. Located in the Madison Concourse, it is a vibrant collection of cartoon faces and abstract shapes that the artist intended to suggest faces encountered in the rush hour commute. “It could be you. It could be me,” she told the New York Times in an article about the unveiling of the work.

Working with glass mosaics were a first for Smith, who is mainly known for her sculptural work. The Presence depicts a single deer standing on a landscape, The Water's Way portrays a recognizable yet unnamed beach, The Sound is the second of three water-inspired pieces with a blue sea overshadowed by storm clouds while The Spring depicts four wild turkeys in their natural habitat. A fifth work, River Light, is displayed a level
above the rest, on the Madison Concourse, and it portrays an abstract representation of sunshine
glinting off of the East River.

The MTA has commissioned artists in the past to create artwork for its subway stations. Back in 2009, the Starn Twins See it split, see it change glass mosaic in the South Ferry Terminal covered almost the entire interior of that subway station, as reported by the Glass Quarterly Hot Sheet, with “images of a historic New York City map; turning leaves; and the intertwining, sinewy silhouettes of tree branches.”

More recently, contemporary glass artist Jim Hodges was commissioned for a project by the MTA in 2021, this time for a stairwell leading from street-level Grand Central Station to the subway station below. His water-jet cut glass tapestry titled I dreamed a world and called it Love, is a transformative experience for  viewers.

“The composition of the piece,” Hodges shared with readers of the Summer 2021 edition of Glass (#163), “starting from the upper to the lower, was cued towards references in the real world - nature, and the implied or symbolic heavens, which is the ceiling.”

Glass mosaics have a unique power to bring the light of the natural world into the underground tunnels of subway stations. Kusama and Smith are the latest commissioned to create art for the newly constructed train terminal walls. Other artists with work on display in include photographer Paul Pfeiffer and digital artists Gabriel Barcia-Colombo, Jordan Bruner, and the Red Nose Studio.