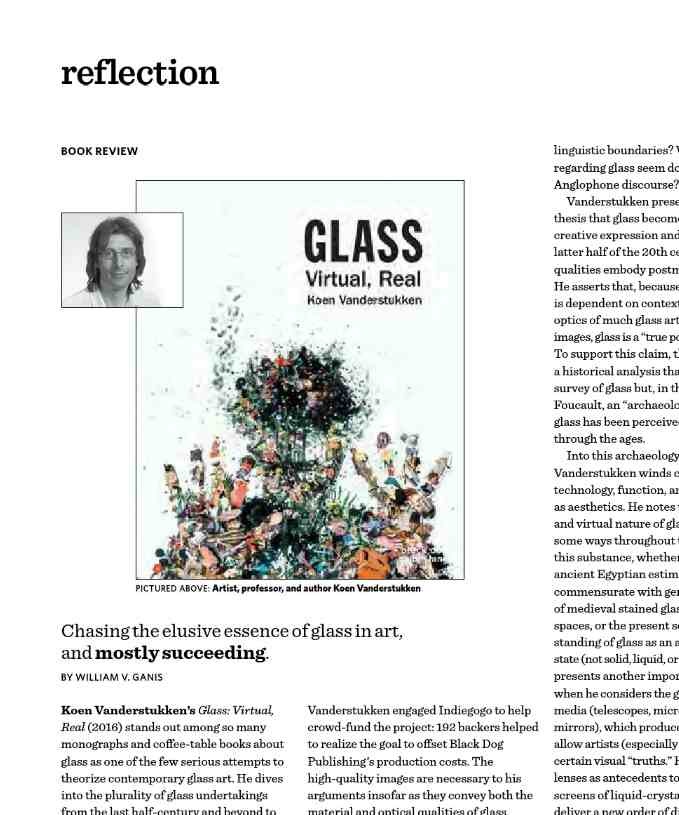 The cover of GLASS: Virtual, Real scheduled to be published in Fall 2016.

The back-page "Reflection" essay in the newly published issue of GLASS: The UrbanGlass Art Quarterly (Spring 2017, #146) is dedicated to an in-depth book review of a new scholarly work by Koen Vanderstukken, an artist and head of the glass program at Sheridan College in Ontario, Canada. The GLASS Quarterly Hot Sheet talked with the reviewer — the magazine's contributing editor William Ganis, who is also the chair of art and design at Indiana State University — about his assessment of this major new work.

GLASS: In your review, you describe Koen's books as "one of the few serious attempts to theorize contemporary glass art." What do you see as the state of contemporary glass art theory and criticism? What are the venues and the level of discourse?
William Ganis: It’s telling that Vanderstukken had to resort to crowdfunding for his project—that no publisher would assume the full risk of underwriting a “theoretical” text. In order to realize his vision, he had to create (albeit in conjunction with Black Dog Press) his own space. A preponderance of the glass literature is tied to commerce. Monographs are subsidized by dealers and artists’ studios and the articles and reviews in the likes of American Craft and GLASS Quarterly are made possible by ads for galleries and creative-materials suppliers. It would be unfair to say that these patrons are censorious, but they do shape discourse.

GLASS: It was interesting how you identified Koen's multilingualism as an important component to his wider understanding of glass in contemporary art. Do you think he successfully and uniquely synthesized European and U.S. glass approaches, and did he leave out other geographic areas such as Asia?
Ganis: Let’s say that he delivers an awareness that the compelling narratives about American Studio Glass are shaped by nationalism and Anglophony. But that's the nature of epistemology, how do we know what we don’t know? Even with the web, unless a text is translated from Mandarin or Pashto, it remains largely inaccessible to those not functioning in those languages. The Rakow Library is the only place I can think of that approaches a cosmopolitan endeavor to collect and make available all texts about glass. 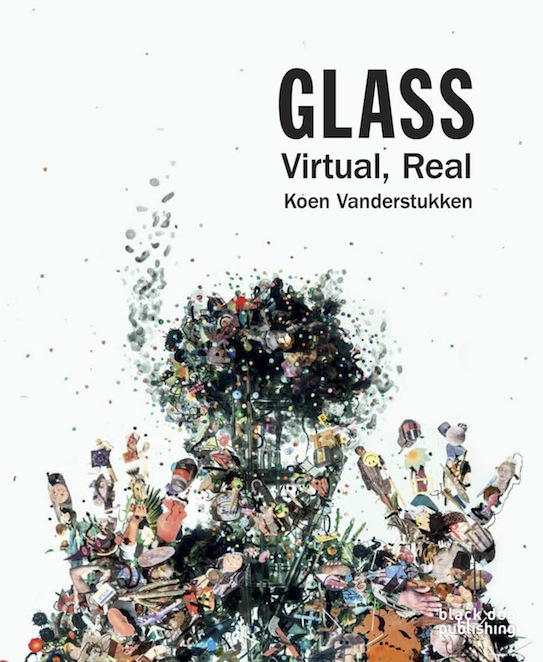 GLASS: You take Koen to task for not recognizing that the Renaissance distinction between makers and painters remains in effect for work by Berengo Projects. Is it fair to ask him to be more critical when "Glasstress" seems to have broken through in the art world in a way that glass artists have longed for?
Ganis: By “critical” I mean “discerning.” Vanderstukken is particular and smart throughout much of his text. I was surprised that he didn’t acknowledge this split when it comes to "Glasstress" artists. Is Berengoism what glass artists have longed for? I doubt there is a consensus of thought. I’ll posit that Berengo fosters the use of glass in the milieu of contemporary art. I see scales and production expenses that necessitate the capital brought by the brand names in contemporary art. In many ways Berengo’s enterprise is exclusionary—his makers are rendered (mostly) invisible and these undertakings invalidate the powerful amalgamation of conceptual strategies with personal expression and craftspersonship that is so satisfying and humanizing in much of studio glass.

GLASS: While you are not hesitant to criticize aspects of Koen's arguments, you also praise his effort, particularly in his interpretation of how digital experiences signal a new frontier for works in glass. How do you see his analysis as particularly noteworthy and convincing?
Ganis: I'm writing this answer on a flight from Las Vegas, and Vanderstukken’s thoughts helped me to see that city differently.  There are impressive slot machines with six-foot-tall concave glass screens. Up close, these create an immersive field, but from afar the machines have a compelling, sculptural quality. Architecturally scaled LCD screens show broadcasts of athletic contests in the sports-book areas, and parts of The Strip are shaped by immense LED arrays evocative of Blade Runner. There is a Jenny Holzer LED work shaped to the curve of the Aria Hotel’s valet area that has an astonishing presence in which he scrolling letters seem physical. In all of these examples there is a palpable presence of glass that goes with the virtual images conveyed through it.  I like that Vanderstukken argues that glass is intrinsic to digital display, this means that glass is and will be the manifestation of the digital. Technologies such as Gorilla Glass are becoming more and more pliable—the ability to shape the LCDs and glass will lead to new creative and expressive possibilities.

To read the full review, see the latest issue of GLASS magazine, also available as a digital download.