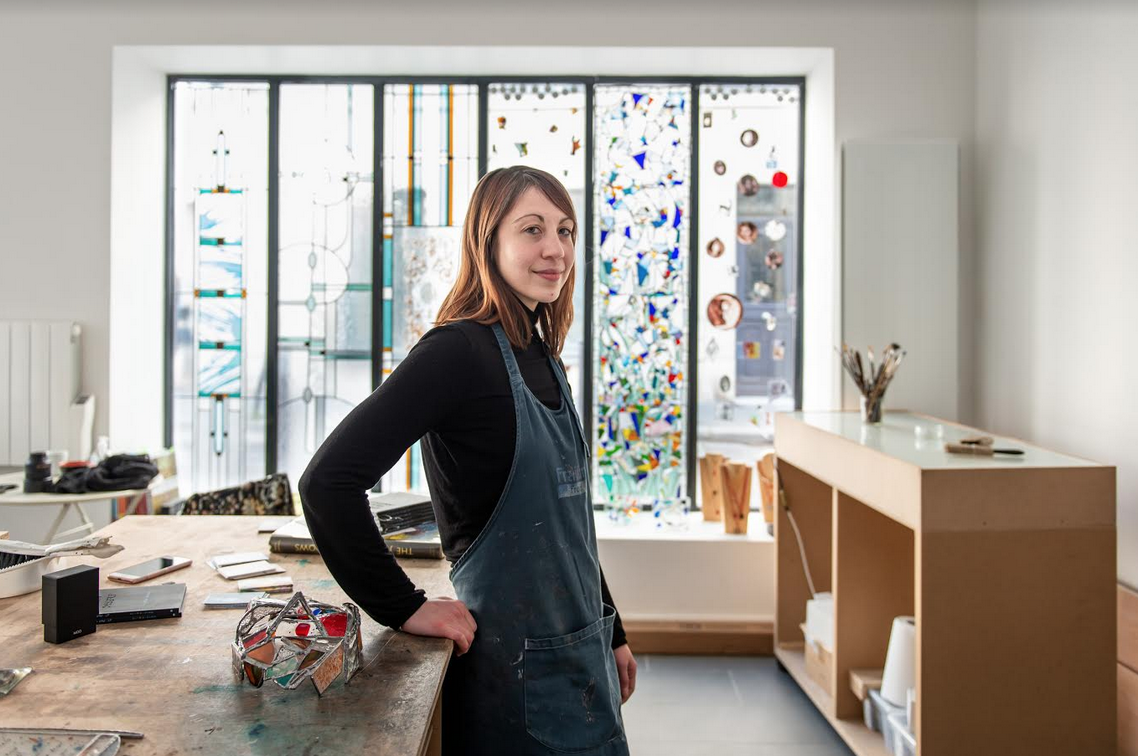 Alison Grace Koehler, who's been seeking ways to fuse stained glass and poetry through  innovative performances that use projected imagery during live readings, has recently published a book that brings together the word and ethereal image in printed form. An American expatriate, Koehler discovered stained-glass while walking along a winding street near the Gare du Nord in Paris and spotted a series of paintings and glass panels through a studio window. Out of curiosity, she knocked on the door and was invited in by the Kurdish artist, who for decades had been living in Paris, where he offered stained glass workshops. Koehler had experience cutting glass when she assisted an artist in Copenhagen, Denmark, after graduating with a BA from Macalester College in 2008, and so she signed up. She was so enamored by the stained-glass process, she would go on to get an advanced degree from the École Nationale Supérieure des Arts Appliqués et des Métiers d’Art, and would be admitted into a guild of emerging stained-glass artists. Based in Paris, Koehler now shares a studio space with another stained-glass artist from the guild. Since she began working with stained glass, she has sought ways to animate the form -- from manipulating glass components on an old-fashioned transparency projector to using a live video feed projected on her own figure as she reads her poems, using the sounds of breaking glass as rhythmic interludes of the performance. The Glass Quarterly Hot Sheet recently interviewed Koehler via email about her new book project, and her attempts to bring her various media together into a single work.

Glass: The UrbanGlass Art Quarterly: Can you share some of the chronology of your progress in poetry and in glass -- were they contemporaneous interests or did one lead to the other? Did you study both? When did you connect the two pursuits?
Alison Grace Koehler: Visual art and writing have been interests from an early age, and more serious pursuits for over a decade. After exploring painting at a liberal arts college I found an opportunity to work for an artist in Denmark. This took my trajectory out of the US in a more permanent way than I had initially imagined. Shortly after that I discovered stained glass as an artistic medium in France, and decided to apply for a program specializing in that there. I didn’t study poetry in the same way, but started to step into that world during a four month stay in Scotland, on a scholarship to work with stained glass archives, following my studies in France. Being back in an anglophone environment, disconnected from other aspects of my then-life, and in a more solitary space, encouraged writing as self-excavation, as poetry. The intersection of poetry and stained glass probably began at that moment too. They each grew as separate branches, intertwining and deepening in new ways after returning to Paris.

Glass: How do you see stained glass, in particular, and poetry, in general, in relationship to one another? Of course, stained glass has a long history as a form of literary expression as visualizations of biblical scenes in narrative depiction in stained glass.
Koehler: For me stained glass and poetry have a reciprocal relationship that is also a very personal one. I tend to construct a poem in fragments that build into and break upon each other. This process is similar to the one I use to make a window, often starting with the colored shards that I gather, and soldering them into a half-formed vision that completes itself in the process of creation. This isn’t a traditional way of making a window, and to me it sometimes feels more like painting, painting a poem out of the moment and color and light.

I’m both interested in the history of stained glass and grateful to be so near its inception, while I continue to explore its evolving contours. For me, however, its poetry lies outside of what it can express in story, and more inside the ineffable worlds it can, and always has evoked.

Glass: What draws you to this form of expression, and how does the additional media of photography fit into the constellation?
Koehler: I’m interested in the many paradoxes held within stained glass as a medium of expression. As a surface that won’t absorb liquid it offers a compelling resistance to paint, and to painting. With an intended or accidental brush of the finger whatever is there will disappear in an instant. And yet it softens to a liquid with enough heat, opening itself to faces, motifs, individual expression - hardening back into a solid that will exist for centuries if not forever.  It, as a window, protects us from the outside elements, though is wide open to the changing face of sunlight. It is so durable, and so breakable too. It is color fixed in space, and color forever moving and alive. Photography can be a way to catch some of these fleeting combinations of environment, art, and light - preserving them, and projecting them into new spaces, altering them temporarily and forever.

Koehler: Yes, I do. One of my favorites is in Conques, whose stained glass windows were designed by Pierre Soulages. It, much like La Sainte Chapelle, has a completely immersive interior atmosphere. The glass is also visible from the exterior in a very unique way - appearing to be a cloudy blue, beside the stone’s orangey ochre. Inside it is luminous, alternating between opalescent hots and cools, while remaining translucent. The design is minimal, evocative of the landscape beyond, as well as something sublime and eternal.

To find more about Alison Grace Koehler's work in stained-glass, visit her studio page. To see her performances, visit her YouTube channel. You can purchase a copy of "Stained Glass Poetry" via this link.