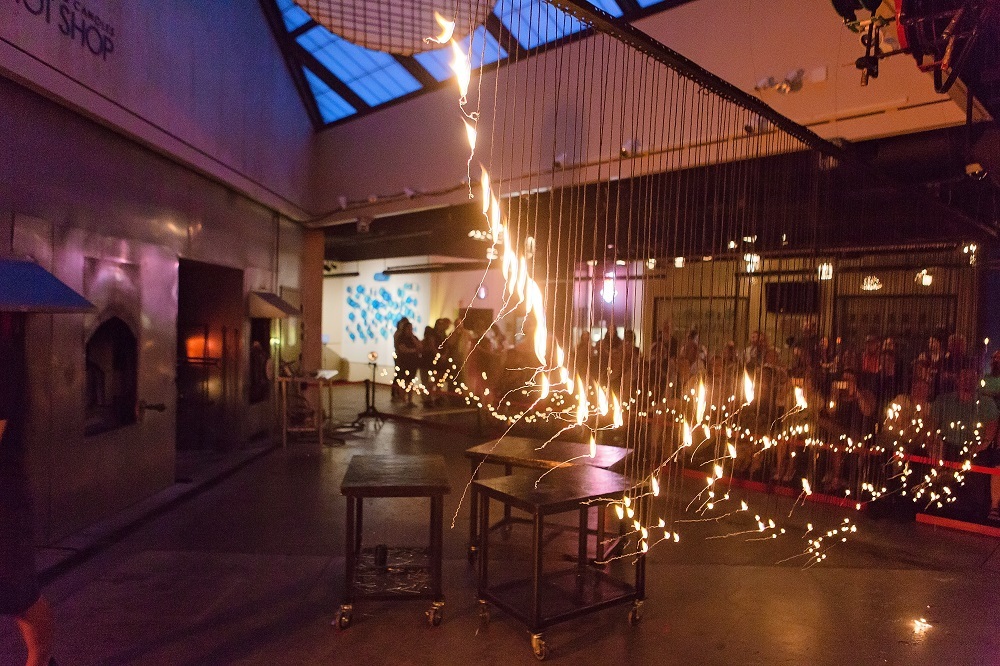 Micah Evans' curtain of black threads burning at the beginning of his Third Thursday performance at the Chrysler Museum of Art Glass Studio. courtesy: chrysler museum of art.

Washington State-native flameworker Micah Evans does not consider himself a performance artist, but he undoubtedly put on a show for the Chrysler Museum of Art in Norfolk, Virginia, recently while working as a visiting artist from July 20th to 23rd. Evans grew up in Seattle, Washington in the 1990s, surrounded by a culture heavily saturated with marijuana and glass pipe-making. This environment presented Evans with a less-than-traditional gateway into glass art, as he got his start by making smoke pipes at a local flameworking studio. Evans’ work has since expanded to include traditional craft forms and personal sculptural work, which lead him to be recognized as the first flameworker to receive a residency at Penland School of Crafts in North Carolina, which he completed from 2012 until 2015. 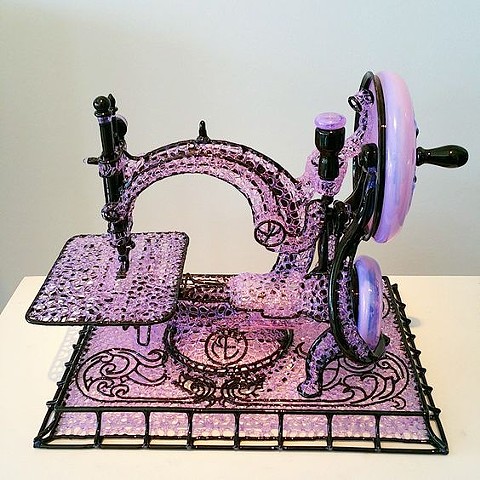 During Evans’ residency at Penland, he met the Chrysler Museum’s glass studio manager, Charlotte Potter, who asked Evans to be a visiting artist at the museum-- which he had intended to do in 2016 but, due to scheduling conflicts, was moved to this year. Unbeknownst to either of them, the date they scheduled fell on the same week that performance art pieces are done in the glass studio. Because of this, Potter asked him if he would do a performance piece. Evans, a self-described introvert, was originally apprehensive about taking on a performance role.

“I looked it up and they do this amazing performance art series and people take it very seriously,” he said during a telephone interview with the GLASS Quarterly Hot Sheet. “I am NOT a performance artist, it’s kind of like my worst fear-- so I immediately kind of hit the fetal position.” 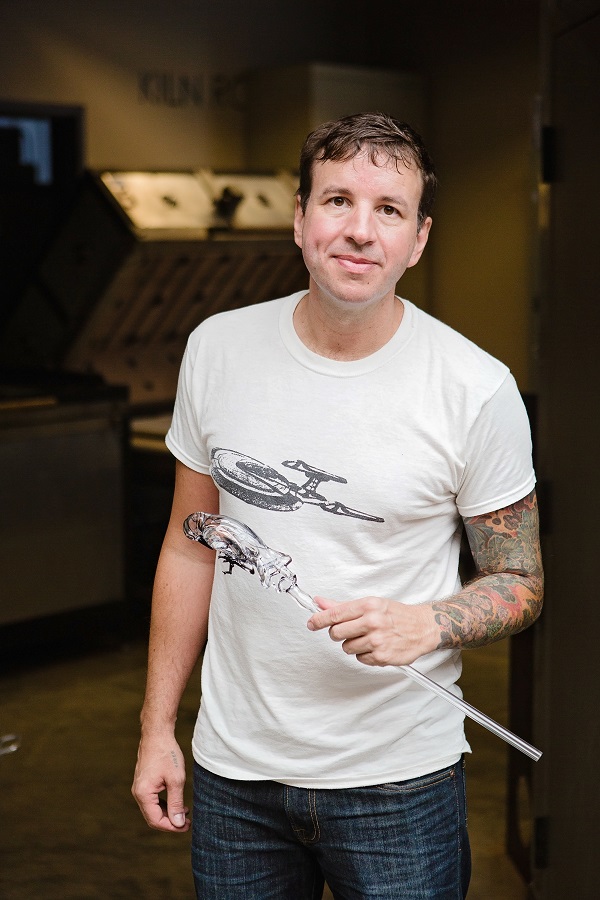 But instead of backing out, Evans faced his fear. He reached out to Robin Rogers, the assistant manager at Chrysler’s glass studio, who helped him organize a performance piece-- one that was demonstrated to a sold-out crowd his first day there.

“It was fantastic. I’m glad they made me do it,” Evans said. “It’s not something I would have volunteered for and I actually learned a lot, it was very informative.”

The performance began with a curtain formed out of black threads which were lit aflame and burned, as Evans described, “like a thousand little candles” to reveal the glassblowing floor. The actual performance revolved around creating a map-- Evans recent work has involved making what he calls “sculptural typographies." In the performance, he took a large quilting hoop and stretched a clear cloth over it. He stretched a grid of black yarn-- which resembled graph paper-- over the top of the hoop and clear cloth and then used flameworked glass tripods to raise and lower this grid in a way that resembled typography or mountain ranges. Light was projected on and through the fabric to produce what he described as a “dramatic cast of shadows.” 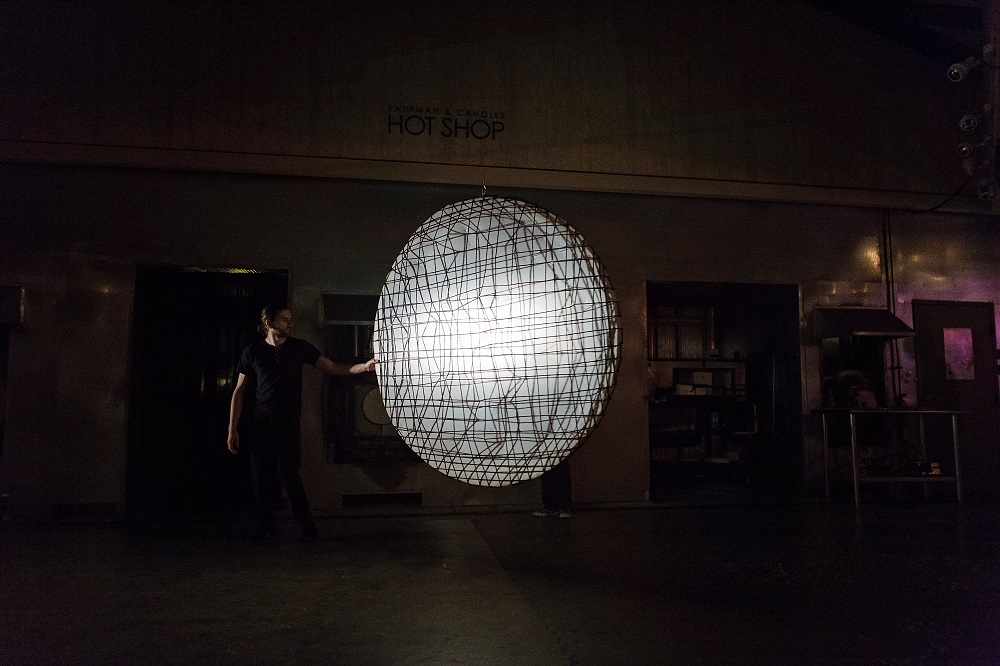 “The performance kind of revolved around creating that map and the group of us kind of placing and altering this form-- raising and rotating and projecting,” Evans said. “The glass tripods kind of tumbled down and the floor was mic’d. So we had this sort of sound and light element.”

Evans said that the whole process was really fun-- he was able to find innovative, creative methods to interact with typography, which taught him new techniques to implement in future work.

Third Thursday at the Glass Studio | Something Along Those Lines | By Micah Evans from Echard Wheeler on Vimeo.

From the morning to evening in the following days that Evans spent as a visiting artist at the Chrysler, he hosted flameworking demonstrations and answered questions from museum visitors. By the end of his time there, he was able to produce three pieces in what he described as a “comfortable work environment” with a “incredibly efficient and intelligent” group of volunteers and staff. Overall, he said the experience was rewarding and was able to contemplate his work in new ways he hadn’t considered before.

“A lot of times you get the same questions, but almost every time you get asked questions about your work that you’ve never had to answer,” Evans said. “The more time you spend time talking about your work-- not quite a rehearsed slideshow or artist’s statement about your work-- but when you’re forced to think about things you have and and why you do them, you learn a little more every time.” 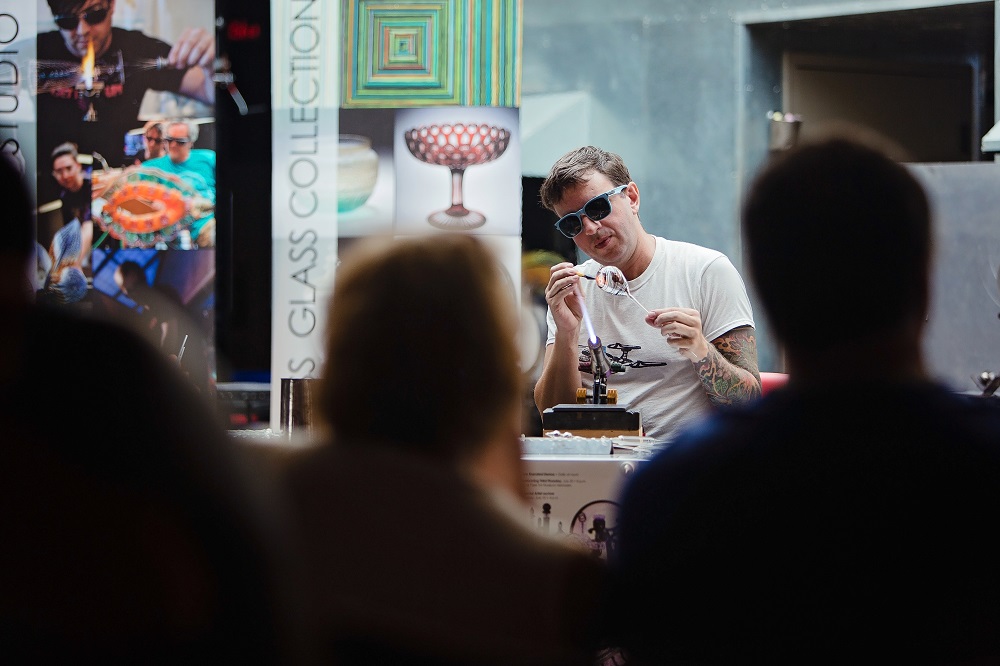 As for the future, Evans will be displaying the sculptural typography work he made during his time at Chrysler at a show at Pilchuck Gallery, in downtown Seattle this September. He will also be hosting a bottle show this upcoming spring, an event he does annually to display his decanters and other craftwork.