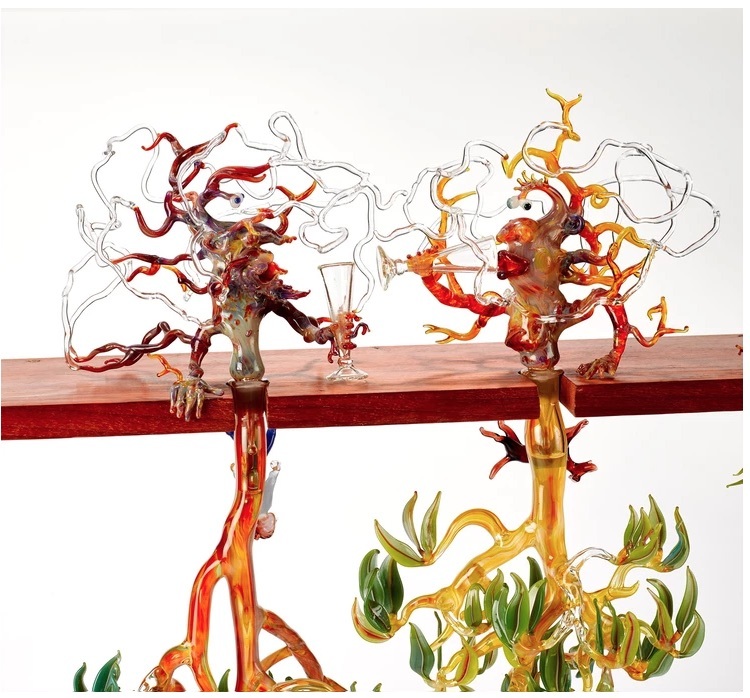 Mark Eliott has been named the winner of the 2019 Tom Malone Prize, marking the first time a flameworker has been awarded this prestigious Australian award The multi-media artist and Canberra Glassworks instructor who works primarily with borosilicate glass joins previous awardees Clare Belfrage, Gabriella Bisetto, Charles Butcher, Cobi Cockburn, Brian Corr, Mel Douglas, Deirdre Feeney, Kevin Gordon, Marc Leib, Jessica Loughlin, Tom Moore, Nick Mount and Benjamin Sewell. Along with the winning work being acquired by The State Art Collection at the Art Gallery of Western Australia, Eliott will also eceive a cash award of AU$ 15,000. The prize has been offered since 2003 and is supported by philanthropist Sheryl Grimwood, who recently increased the award amount from AU$ 12,000 to AU$ 15,000.

Eliott's winning work is part of the artist's "Arboreal" series, which he discusses on his artist website. He was so moved by reading Peter Wohlleben’s The Hidden Life of Trees that he no longer can see trees the same way, and he anthropomorphized them into a male and female figure sharing a drink across a table, which is made of the type of red cedar wood you might find at an outdoor bar or restaurant. The whimsical nature of the renderings of the two figures, with the tree characters sporting cartoon eyes, is never cloying because of the intricate flameworked filigree, and careful coloration.

Art Gallery of Western Australia curator Robert Cook explained how this work was chosen in a prepared statement: “As we moved around the highly competitive field of this year’s truly outstanding works, we found ourselves coming back to our eventual winner: Mark Eliott’s wonderful Down at the water table. What an unusual piece! Cartoony but not humorous, whimsical but not impulsive, it’s entirely in keeping with the offbeat, ever-inventive work Mark has been making over the last 20 years. It’s the first time an artist using predominantly flame-work has won the Prize, and it’s a brilliant example of the possibilities inherent in this technique. Fluid and downright untamed, Down at the water table feels simultaneously carefully planned and totally seat-of-the-pants improvised. Either way, it’s a delicate high-wire act of technical skill, yet also a very intimate work. There’s a lot to observe at close detail and a stack of surprises to be encountered (like the figures in the upside down human/canine realm) and really beautiful chromatic nuances. It’s brilliantly fresh in all ways, and we couldn’t be happier with Mark’s piece as a winner for 2019.”

Earlier this year, Cook told The Guardian newspaper that "Glass is one of the most exciting and dynamic art forms in this country. It is a uniquely captivating medium, capable of almost endless transformation."