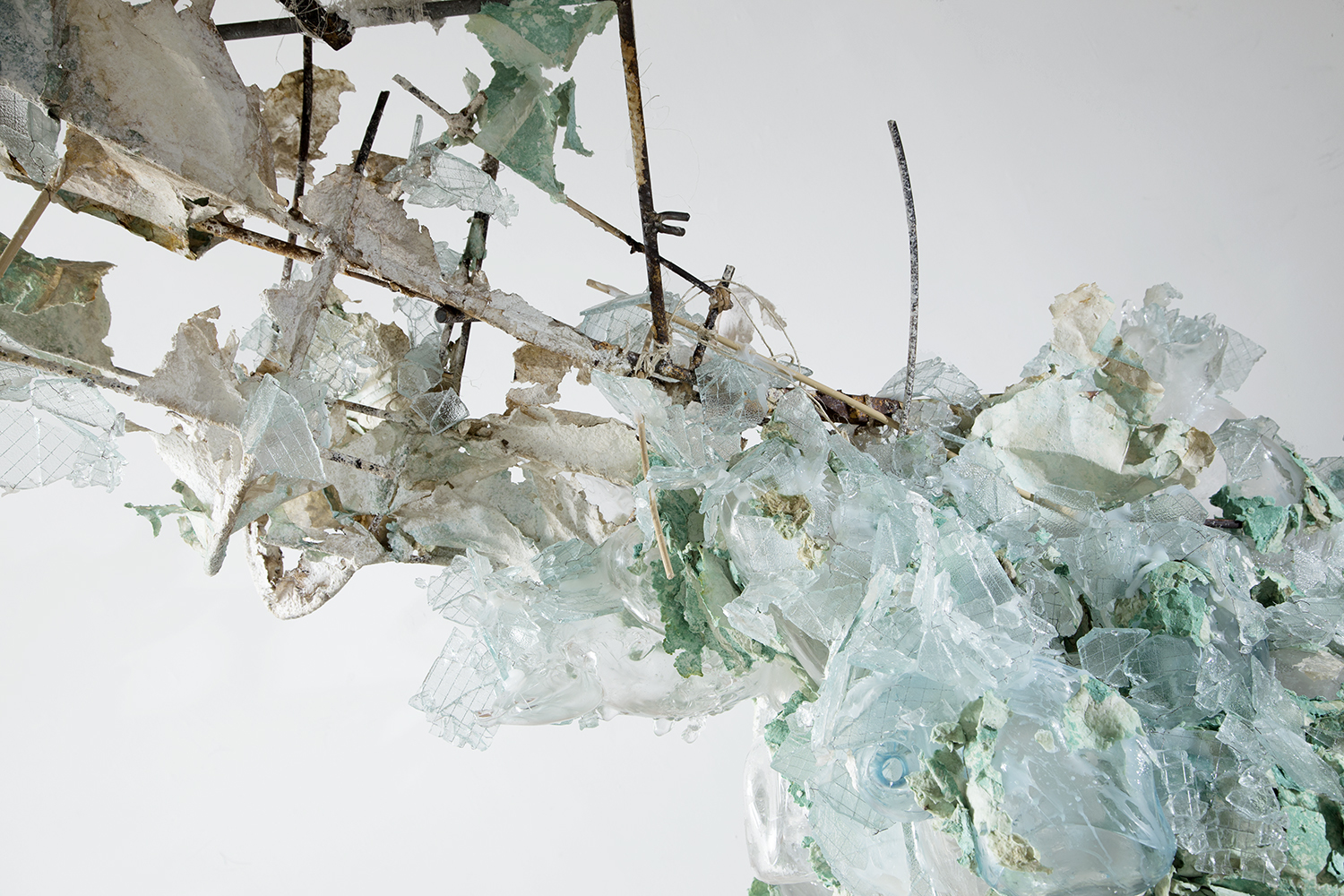 A new work in stained glass by Brooklyn-based artist Beau Stanton is featured in “Art Collector Starter Kit III” at the Corey Helford Gallery in Culver City, CA, a large group exhibition featuring 12-inch-by-12-inch paintings from 37 artists that opened on Saturday, July 25th. The use of glass is a recent addition to Stanton's art practice, which typically includes paintings, prints, and murals.

The painter’s studio is situated on the second floor of a building in the industrial neighborhood of Red Hook, overlooking Louis Valentino Jr. Park and the Upper Bay of the New York Harbor. The view from his window is often lined with small boats and docking cruise ships; from the paintings and antique nautical items hung on the walls, the inspiration of this landscape is clear. Motifs of ships, submarines, and sea creatures can be found in a lot of his recent work, including the enameled stained glass panel titled “Derelict Vessel III” that is on view at the Corey Helford Gallery through Saturday, August 15th.

Owned and operated by Bruce and Jan Corey Helford, a husband-and-wife team, the Corey Helford Gallery displays the work of contemporary artists who derive inspiration from popular culture, "encompassing the genres of New Figurative, Pop Surreal, Graffiti and Street Art," as stated on their website. Much of Stanton's body of work can be described in these terms, as his are often representative, yet with multiple layers and colors that create an illusory depth to the two-dimensional works. Commonly, his art involves subjects like gears, bare trees, or the fragmentation of the interior and exterior of the human body, focusing on anything from the eye, to the figure, to muscle structure, to parts of the skeleton, against detailed backgrounds of complex mandala-like patterns. Particularly in recent work, not much of Beau Stanton's surfaces are untouched by his characteristic intricate designs. The effects produced by layering colors and by variations in luminosity intrigue him. He often uses icy hues of blue and green, or fiery shades of reds, magentas, and yellows, accented with rusty neutrals that make his paintings feel as though they are from an early industrial age, whether they are presented as predominantly bright or dark in tone.

Given the extensive color palette of flat glass and its alluring principle of transparency, stained glass was a logical transition for him to continue to explore his interest in color and light beyond his typical mediums. Though his interest in the medium has been held since learning basic techniques in an art class in middle school, he has only been incorporating it into his studio practice for the past year. Teaching himself about the techniques of painting on glass from studying Albinas Elskus' book, “The Art of Painting on Glass”, he has experimented with different ways of applying imagery to his glass pieces, using screen printing, painting with trace paint mixed with liquid gum arabic, and, for “Derelict Vessel III”, using enamel, which was kiln-fired onto the glass at the UrbanGlass studio. Through trying various techniques to construct his glass panels, he settled on copper solder – a physically lighter and more delicate alternative to lead came that doesn't detract from the imagery or the intricate decorative patterns that accompany the subject of the compositions.

Like many artists working in stained glass, Stanton has been influenced by Tiffany Studios, particularly by the historic glassmaker's experimentation and evaluation of results. There is much that he admires about Tiffany's work – he notes that, “the experiments with the types and thickness of glass and the innovation in swirls and patterns in [flash] glass is like alchemy.” Although his work does not involve the almost alchemic process of mixing colors, he plays with color by manipulating it from behind with frames built with LED lights. “Derelict Vessel III” is made of transparent glass backed with white LED lights, but the use of RGB LED lights in some other glassworks presents an alternating, intoxicating array of colors, illuminating the potential glass had in expanding his experimental approach to color.

Although he has only been making stained glass for about one short year, the work has already made its debut in galleries. Last fall he had two back-to-back solo exhibitions in the United Kingdom, in the Crypt of St. John the Baptist in Bristol and at Stolen Space Gallery in London. While his work is currently shifting back towards prints and paintings, some stained glass pieces will be on view in an upcoming group exhibition in New York City this October.