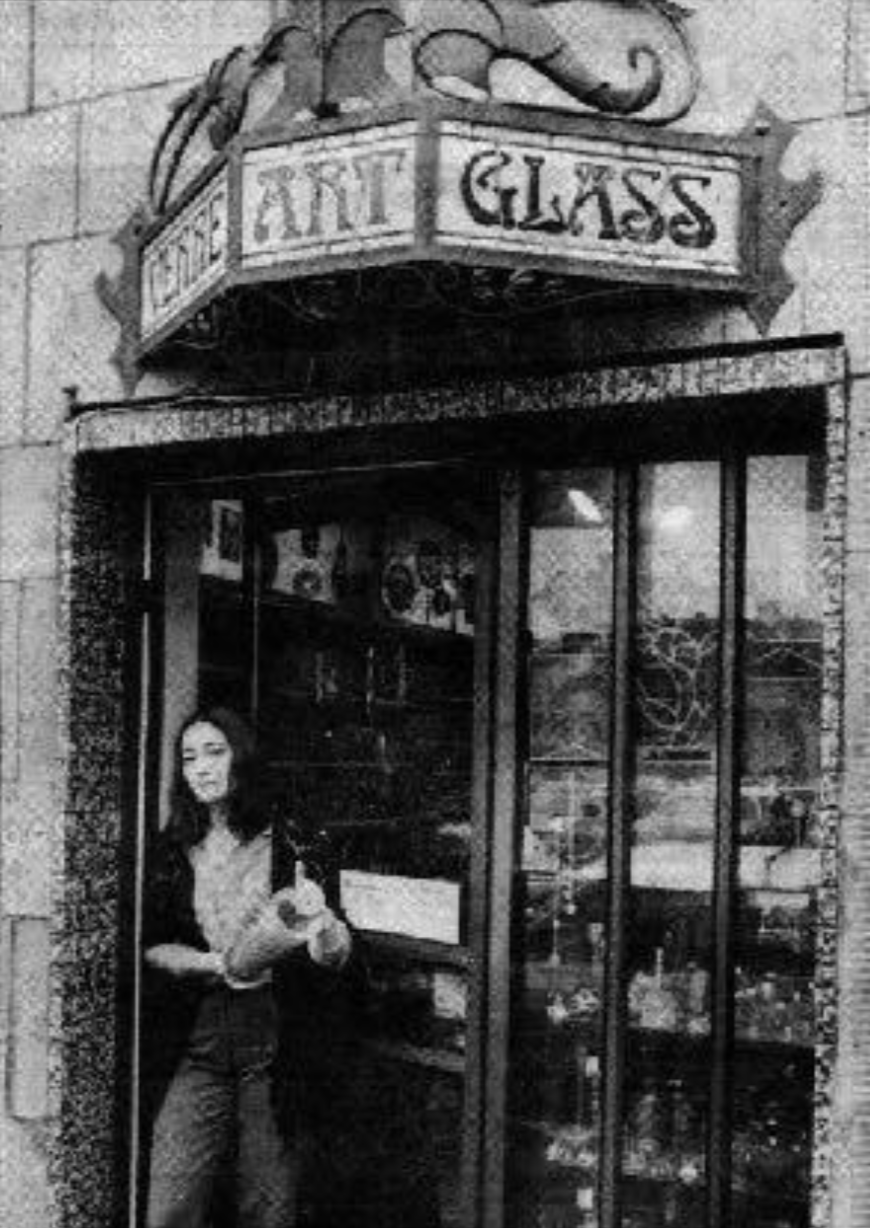 Montreal's Verre Art Glass was the very first iteration of the Elena Lee Galerie, and it opened in 1976.

When we think about the first galleries devoted exclusively to glass art, names such as Heller, Traver, and Habatat, spring to mind, as the pioneering dealers who helped the field develop a commercial base. Few know of a parallel story that was unfolding simultaneously just north of the border, where a bold gallery owner hoisted a Canadian flag for glass art in 1976. When European-born Elena Lee opened the doors of her first gallery, Verre Art Glass, in  Montreal, Canada, she had been inspired by her travels and what she found during a visit to Erwin Eisch's studio in Frauenau. Her husband, Stuart, was originally from Quebec, and she had a young son, and so they all relocated to Montreal, where she launched a career that would stretch for more than 40 years.

In an interview with the Glass Quarterly Hot Sheet, Lee put great emphasis on the fact that the Canadian glass scene owes a debt to its American neighbors: “The whole glass movement in Canada or elsewhere would not have come into existence if it were not for the support of the American movement and the pioneering spirit of “Why can’t we do it, too?””

Armed with the confidence of her international experiences, Lee was able to set the foundations of the Studio Glass movement in Canada which, until then, was just starting out. “If you ask me what I’m most proud of, it’s that I did it at all. There was nothing there, absolutely nothing in the public eye.”

With a modest beginning and only two glassblowers’ creations to display alongside works by Eisch, the gallery rapidly grew in commercial activity as did glass art as a whole in Canada. Lee often, to her own expense, invited young glass artists to participate in public demonstrations and events. Creating a network of artists, students, educational institutions, and museums, Elena Lee Galerie was able to stay up to date with the next big names and pieces in the field. Lee also made sure to participate in the international glass conferences and fairs such as SOFA Chicago, driving down from Montreal with artists and art in tow. It was through recognition at these American events that the gallery and its associated artists became more widely known in the global glass community.

Lee painstakingly kept the gallery running through the 2008 economic downturn and the 2010 death of her husband, who largely managed gallery operations. Unable to afford to keep the gallery running in light of financial difficulties, Elena Lee Galerie shut its doors in 2014, but she has maintained a consistent social media presence, promoting its associated artists as a courtesy to their long histories together.

A staunch advocate for young artists, she phoned and checked in on those in her network in the aftermath of the gallery closing and the crisis, finding that many had moved to online businesses of their own, were receiving commissions and contracts, and were benefiting from local policies such as the Quebecois law dedicating 1-percent of building construction budgets towards public art commissions.

Reflecting on the closing of her eponymous gallery, and her subsequent step down from the glass scene, Lee is philosophical about the rich history even though the gallery itself is no more. “That doesn’t mean these 40 years were for nothing," Lee said in an interview. "Artists still contact me and tell me, if you hadn’t been there, I wouldn’t have done this. The biggest influence was that I encouraged them to never give up.”