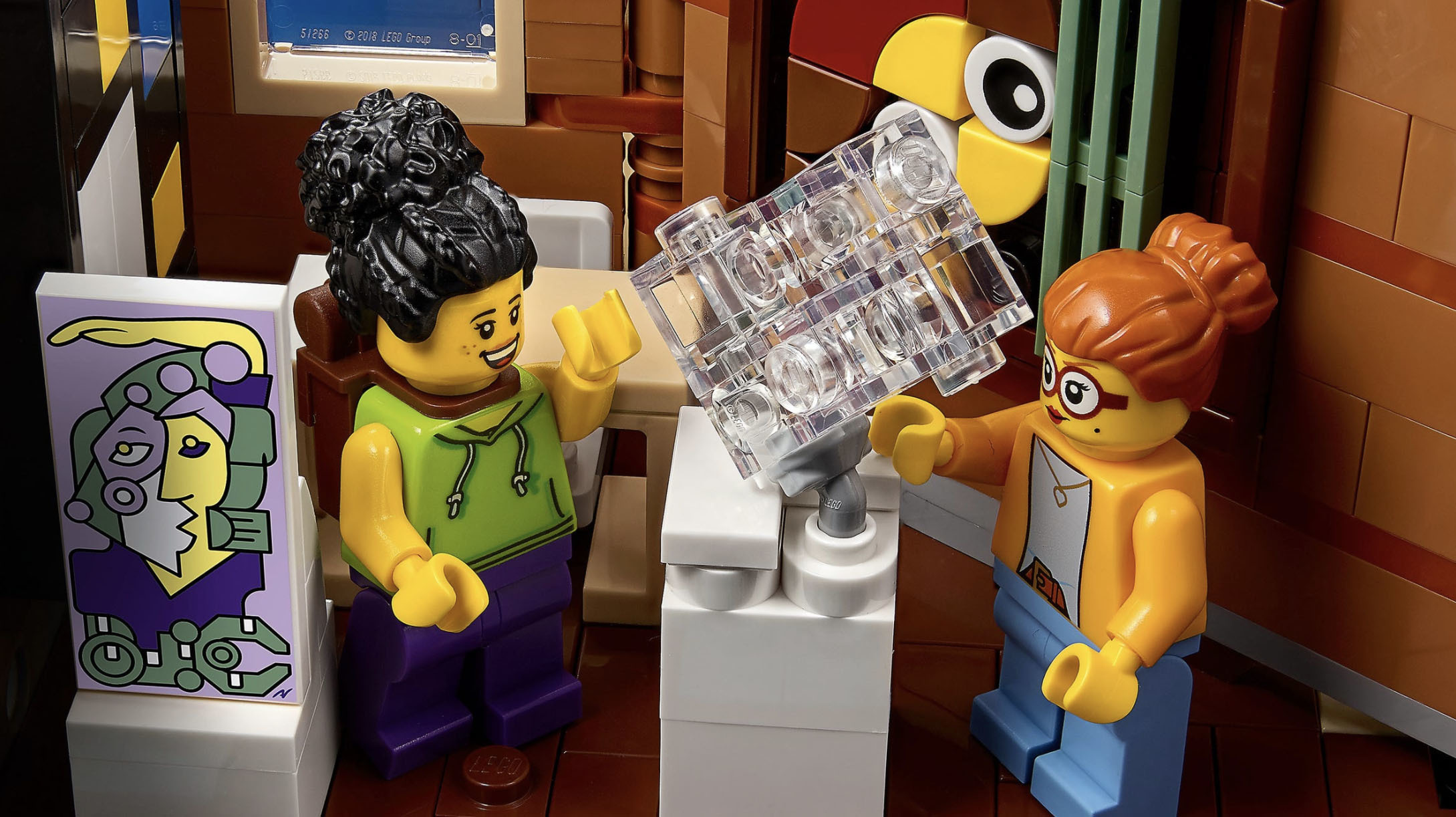 Lego recently released its Boutique Hotel building kit (10297), the latest entry in its Creator Expert: Modular Buildings line directed to adult audiences. The designer Anderson Ward Grubb and illustrator Ashwin Visser have embodied in this miniature the increasing ubiquity of hotels in art districts as well as those such as 21C Museum Hotels or the Conrad Hotel in NYC, which have art collections and galleries. The great glasswork surprise is found in the model gallery in this kit -- a cube comprised of several small, transparent bricks -- the sole sculpture among four tiny artworks.

In an online article entitled "Interview: Secret history of #10297 Boutique Hotel" Grubb and Visser assert that this miniature artwork has a Lego insider meaning—that it is a physical realization of the former "Creator" series logo (though that was always shown as opaque white). They also noted that the works in the gallery are all informed by cubism -- a reference to Lego bricks -- there are obvious references to Mondrian and Picasso. That translucent cube set on a corner, though, seems so familiar but elusive.

Perhaps it could reference the Constructivist experiments in Lucite by Naum Gabo or even Peter Alexander’s cast resin works from the California Light and Space movement? I can’t help but interpret this little clear cube as a reference to glass, especially as the multi-brick structure suggests complex optics. While they are sculptural, my inclination is to ignore the lugs since they are an ubiquitous aspect of the building-block sign systems, so I see a glass cube with an inner life.

Of course, we can go through a half-century of Libenský/Brychtová, Vízner, Hilton, Huchthausen, Weinberg, Taylor and Lee among many others to describe the artistic use of edged optical-glass. Perhaps the specific positioning on a corner evokes the crystal works by Toland Sand and John Kuhn; some Péter Botos works have similar orientation as well as convex and concave articulations to the plastic model.

The core issue is maybe not so much about who is referenced in this diminutive model but that contemporary glass becomes referenced in the international Lego medium and posited as an idea accepted and understood by a wide audience, even to the degree that it is presented alongside broadly recognized Cubism and De Stijl.

Perhaps like musicians parodied by Weird Al Yankovic or cultural tropes finding expression on The Simpsons, Legofication signifies that a once-niche concept such as studio glass has entered into the populist imagination.