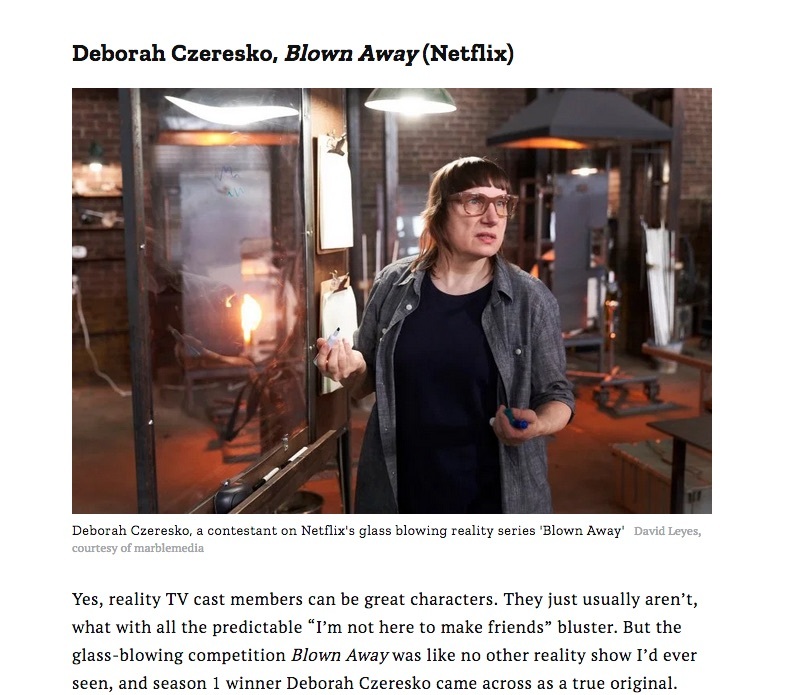 'Tis the season for annual Top Ten lists, when magazines and newspapers release their critics' picks for the most important works of the year. While the previous 12 months' output of everything from books to movies to albums is distilled down to a year-end roundup of the best of the best, the much-discussed glassblowing reality show Blown Away has recently found its way onto two prominent lists.

On December 6, Time magazine television critic Judy Berman released her list of "The Best New TV Characters of 2019" in which she cited prominent Egyptian-American comedian Ramy Youssef's autobiographical main character in the series Ramy, or Nadia Vulvokov, the main character in the fictional series Russian Doll. Included on the list is Deborah Czeresko, who took top honors in the Netflix reality show Blown Away, and, as this list proves, established herself as a bonafide pop-culture personality in the process.

Berman writes: "Steeped in the signifiers of feminist art, the veteran artist created a sexually suggestive breakfast installation and an artificial womb so that men could share in the burden of childbirth. She was also openly strange and rightfully self-assured, her many unapologetic quirks suggesting a level of comfort with herself that few women, real or fictional, ever achieve."

On December 4th, Slate.com's television critic Willa Paskin released her picks for top ten TV programs of the year. Number five on her list? Blown Away, which Paskin confesses she watched as a joke, but found herself "transported ... genuinely impressed, even moved." She confesses to being entranced by Czeresko's glass potatoes in particular, even offering a shout-out to the winner: "If you read this, Deborah Czeresko, the fiery iconoclast of the bunch, please make them available on your website."