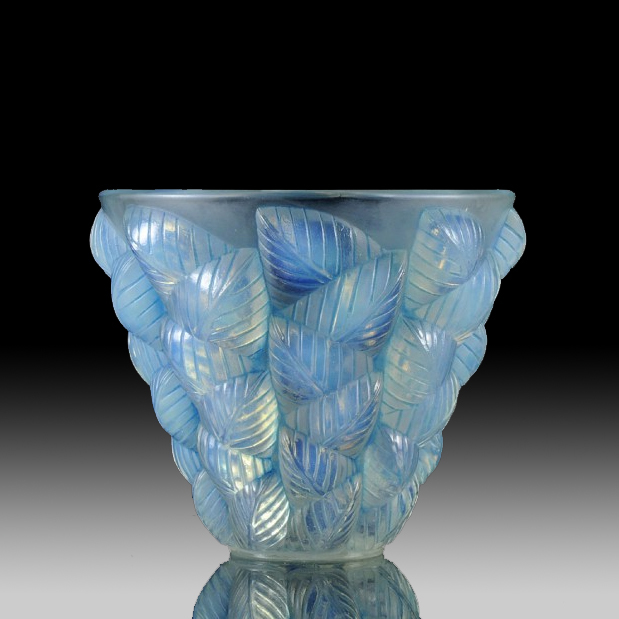 French artist and designer René Lalique mastered jewelry, he mastered glass; but at the core of it all, Lalique mastered the ability to innovate and evolve in response to the rapidly changing cultural landscape of fin de siècle France, as the 19th century gave way to the 20th. To provide a glimpse into the inner workings of Lalique’s mind— presenting the audience with a new point of view on the sources of inspiration behind his highly designed creations— Musée Lalique in Wingen-sur-Moder, France is displaying “Back to the sources: The world that inspired Lalique,” an exhibition that will remain on view until November 5, 2017

In order to fully grasp how Lalique achieved the status of being among the most celebrated artists in the world, with era-defining works spanning across the Art Nouveau and Art Deco periods, is it imperative to travel “back to the source” and chronicle his story from the beginning. Lalique was born in 1860 in Aÿ-en-Champagne, of the Marne region of France. From an early age, he possessed a deep fascination with nature and natural forms and often painted his renderings and interpretations of plants, flowers and insects. He later went on to become an apprentice to craftsman and jeweler Louis Aucoc, where he began his studies and work in jewelry design while taking classes at École des Arts Décoratifs in Paris. After continuing his studies in London for two years and gaining acknowledgement as an independent designer, he returned to Paris in 1885 to take over jeweler Jules Destape’s workshop on Place Gaillon.

Lalique shattered jewelry-design conventions of his time by employing more creative methodology and unique materials into his work. A majority of other designers worked exclusively with precious gemstones and preferred ornate styles, but for Lalique, the monetary value of a stone played no role on his selection; he favored combining stones with other materials like gold, mother-of-pearl, semi-precious stones, ivory and horn, enamel and glass to create one-of-a-kind products.

By the early 1900s, Lalique’s innovative styles granted him immense popularity as a jewelry artist. He became an icon of the Art Nouveau— a movement characterized by delicate and flowing asymmetrical lines and designs, representing objects found in nature such as plants, insects, and the organic curves of the female form; all subjects that Lalique had an ongoing fascination with. The artist was especially enamored by the simplicity and natural subject matter present in Japanese art— the influence is evident in his work. However, the functionality of Lalique’s pieces—  like his comb, Two Swallows with a Stalk of Oats— distinguished them from being carbon copies of Japanese art, but rather, functional and innovative adaptations inspired by it. 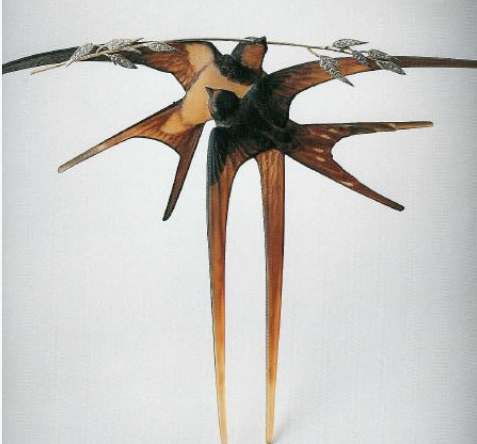 These designs were a hit among socialites and highly sought-after by wealthy collectors; he was even considered “the inventor of modern jewelery,” according to French glass artist Emile Gallé.

But as the Art Nouveau trend died out, Lalique shifted his focus to glass. He opened a shop, in the Place Vendôme square in Paris, where he displayed glass objects in addition to his jewelry. It was here that he was noticed by distinguished perfumer François Coty, who recruited Lalique to design for the perfume industry. The collaboration between Coty and Lalique effectively transformed the industry as perfumes were, for the first time, packaged in attractive bottles for an affordable cost. This partnership led Lalique toward adapting to societal demands; taking an increasingly industrial approach to glass and revolutionizing the material in a way that had never been done before.

His style shifted to Art Deco, producing technical, more symmetrical glass pieces, while staying true to his use of interesting materials to achieve unique effects; like adding phosphates, aluminum oxide and fluorine to create an opaque quality, along with cobalt to for a blue tint as seen in his opalescent mosaic vase: 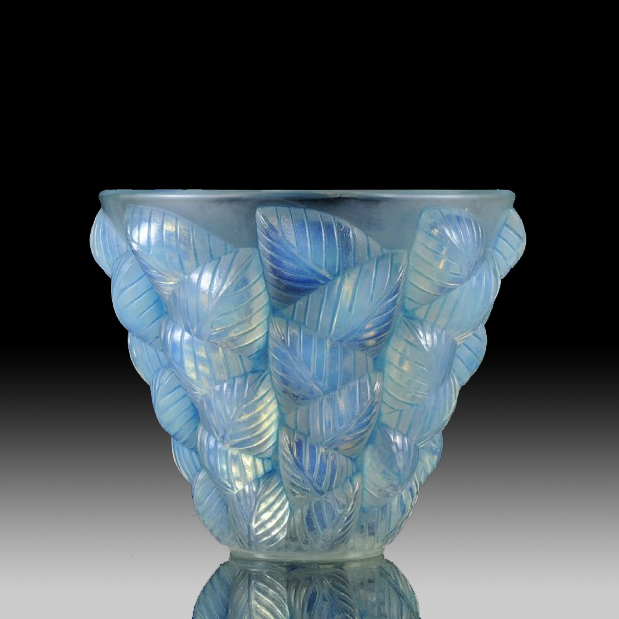 According to Musée Lalique's Anne Céline Desaleux, “René Lalique was not only a gifted jeweler or glassmaker who switched from the Art Nouveau to the Art Déco. He was deeply immersed in the culture of his time and was probably very curious himself.” Desaleux, whose title is communications manager, said that this exhibition gives “new keys in understanding” of the essence of the world Lalique was living in and provided a quote from the artist himself, which encapsulates what she hopes the audience will gain from attending the exhibition:

“Don’t ask me to explain what I hesitate myself to define," Lalique wrote. "What are the principles that guide my work? Frankly, I have no idea. An invincible attraction, the result of a perpetual process that is so effortless, it escapes me; I observe what I see, whether it be a woman, a child, a passer-by, a bird taking flight or a tree bathed in light, radiant in its element; then, all of a sudden, the harmony of a form, an attitude, a gesture or movement comes to the fore, remains in my mind’s eye, and combines with other elements of composition already present; once all this material has gravitated through my mind, the fruit is ripe, all that remains is for me to pick it.”