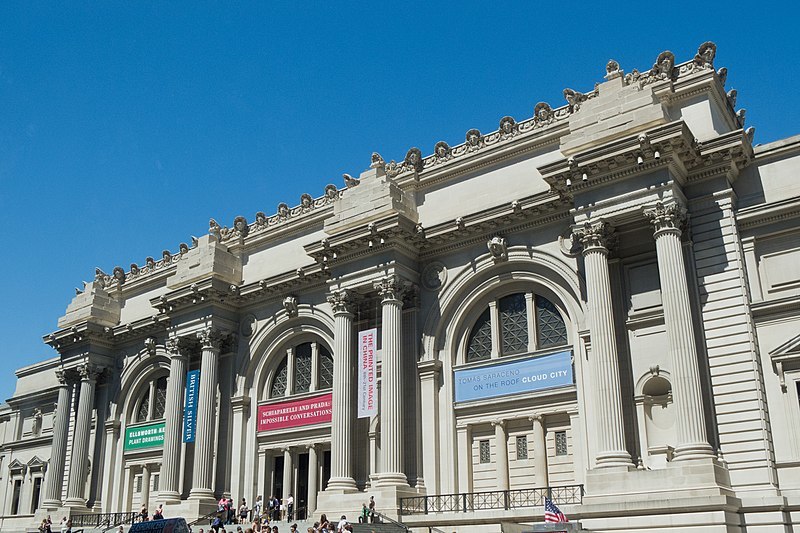 The Metropolitan Museum of Art, perhaps the most revered art museum in the U.S., has closed its doors as a precaution against the spread of COVID-19 in New York City, where the mayor has declared a state of emergency. This flagship museum has closed before due to major threats -- after 9/11 in 2001 and Hurricane Sandy in 2012 --  but unlike those brief days-long closures, this break will run at least from March 13th, 2020, through March 31st, 2020, and could even go longer depending on the evolving conditions. The Met is among a lengthy list of art museums and institutions in New York City taking safety precautions against large gatherings, and includes all large Broadway theaters, Carnegie Hall, all stages of Lincoln Center, as well as other major art museums.

Brooklyn, New York-based glass studio UrbanGlass (the arts nonprofit that publishes Glass Quarterly) that also has a storefront gallery and design shop, has announced it will move to a modified schedule, as well as "suspend our public programs, classes, and new studio rentals temporarily beginning March 16th and running through March 31st as a precautionary measure to reduce the exposure and spreading of the COVID-19 virus." Those registered for cancelled classes are able to get a refund, or can choose to donate the fee.

New York City is one of the centers of the evolving coronavirus pandemic in the U.S., but there are significant numbers elsewhere in the state, which along with California and Washington, leads the nation in confirmed cases. The Hot Sheet spoke with Corning Museum of Glass public relations manager Kim Thompson, who said the Corning, New York, museum is currently open and at this time is keeping its regular business hours, while continuing on with classes, glassblowing demos, and live-streams as scheduled. They have, however, cancelled all public programs and member events through April 1st, and additional closings or modifications would be considered if necessary.

Another concentration of COVID-19 cases has emerged in the suburbs of Seattle, where the Tacoma Art Museum, an anchor in Tacoma, Washington’s downtown with a mission of connecting people through art, has temporarily closed to public, volunteers, and staff through Tuesday, March 31. The closure went into effect at 5PM on Friday, March 13th, 2020. “The care of the Museum’s collections, development of educational resources and programs, and the planning of future exhibitions will continue,” reads the announcement.

As of press time, the neighboring Museum of Glass has cancelled its public programming in March, but remains open with heightened attention to its policies to limit the spread of the virus. Increased cleaning schedules, encouraging social distancing, and urging staff who feel unwell to call out sick are among the steps they have taken.

The city's major art institution, the Seattle Art Museum, closed all three of its locations on Friday, March 13, and plans to remain closed through the end of March at least.

In California, museums vary in their approaches. In San Francisco, the Museum of Craft and Design is maintaining its regular hours. Its eerily appropriate exhibition "Survival Architecture and the Art of Resistance" remains open but all related public programs have been cancelled or postponed.

The DeYoung Museum, home to the Dorothy and George Saxes Collection of Contemporary Craft, is closing today through the end of March. "With the focus on the health and safety of our visitors and staff members, the Fine Arts Museums have made this decision to align with local and federal guidelines and social distancing recommendations for the containment of the coronavirus," reads a brief special website announcement.

Similarly, the San Francisco Museum of Modern Art has announced it will close its doors today until at least Saturday, March 28, 2020, citing regulations governing large gatherings, as well as concern for limiting the spread of COVID-19 in the art community. "We made this decision after much consideration, in concert with fellow arts organizations, and out of concern for the health and well-being of our community," reads the announcement.

The Institute of Contemporary Art in Los Angeles, California will be temporarily closed to the public as well, beginning March 13th and is not stating a re-opening date at this time.

Around the U.S., the opening hours and schedules of institutions that feature glass art vary.

The Chrysler Museum of Art, which features a massive collection of historic and contemporary glass, has just announced they would be closing their doors today, Saturday, March 14th, with a tentative reopening date on March 29th. 2020. That would include both the main museum building in Norfolk, Virginia, as well as the nearby Perry Glass Studio, as well as all public programming during that time. A statement by museum director Erik Neil includes links to the museum's digital collection as well as a virtual tour of the museum.

The Barry Art Museum at Old Dominion University in neighboring Hampton Roads, Virginia, has also just announced it will close its doors today in a brief website announcement.

As of March 13th, the Mint Museum in Charlottesville, Virginia, had cancelled all its public programming through the end of the month, but is remaining open to the public at both locations with the exception of its Lewis Family Gallery at its uptown location.

The Speed Art Museum in Louisville, Kentucky will be closed to the public until April 1st, 2020, and closed its doors on the night of March 13th.

Wheaton Arts, a Cultural Center and non-profit arts education organization in Millville, New Jersey, that operates the Museum of American Glass, the Creative Glass Fellowship, as well as other programs with a focus on the medium of glass, has cancelled all of their public programming through April 14th 2020, including their anticipated Quilt Show on March 14th and 15th. However, the museum and store remains open at this time.

In the state of Ohio, The Toledo Museum of Art, and its Glass Pavilion, will be closed to the public beginning Tuesday, March 17, at least through Friday, April 3, with all its events including glass-art workshops and public events cancelled through April 3rd. The TMA will reopen in April with the date subject to change based on circumstances at that time.

Museum and exhibition venue closings and event cancellations are widespread across the United States and Internationally, and the situation is evolving rapidly in response to new developments. In order to check the status of a particular institution, it's best to visit each institution's website, where you are likely to find a statement regarding the precautions they will be taking to prevent the spread of COVID-19, as well as the latest adjustments to operations and hours.