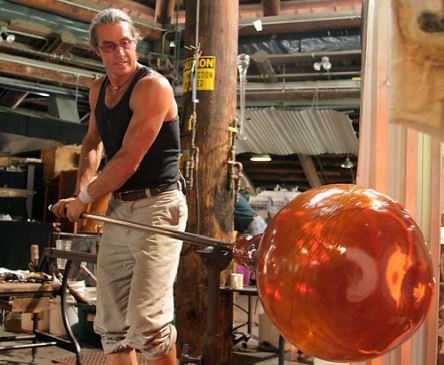 In some ways, we were all buried by the pandemic -- cloistered away in our homes facing an uncertain but deadly virus, laying low. There was a shift inward, one that allowed introspection but also digging in to the essentials of identity, mortality, our place in the world. Now, as the pandemic recedes, as vaccines and new treatments take away its lethality, we are emerging into a new world, and one facing new uncertainties and brutalities in the East with the harrowing weeks-old Russian invasion of Ukraine. In times like these, one seeks the universal as both a higher truth and proof that we can endure as a species. These are some of the reasons why the William Morris retrospective exhibition on view atHawk Galleries in Columbus, Ohio, is so timely. The Glass Quarterly Hot Sheet had an opportunity to learn more about the exhibition of an artist who retired from making new work in 2007, about how the exhibition came to be and why it is important now, through an exchange with Tom Hawk.

Glass: In the years since William Morris announced his retirement in 2007, have there been any changes in how the work is viewed and understood?
Hawk: I believe his retirement left a tremendous and irreplaceable void in the arts that this new collection helps to fill.  I think his work has stood the test of time through his narrative of how he profoundly appreciates the bond between humankind and nature. His work captures a spiritual kind of reverence for the physical world-- imagine the rituals and ceremonies of early man, who probably cherished nature more than we do today. It’s not unlike the choreography of his dynamic team in the hot shop, and how they breathe life in to the work. Bill captured these sentiments beautifully when he stated that he chooses not to live in a state of fear, but what he calls its polar opposite, of a state of grace. He continued saying “Living in a state of grace is appreciating the abundance in your life and not grasping for things like selling the next piece or finding the next lover. In a state of grace you are grasping for nothing.”

Glass: What guided the selection of the work in your exhibition? Were you pursuing a particular curatorial direction in the work that is on display?
Hawk: The collection was guided by the work itself and curating it with his daughter, Jackie, who had made herself quite familiar with special nuances in the pieces.  Some are featured in books on Morris and others part of a travelling museum exhibition.  These facts told me that these works stood out to Morris himself, he personally curated them first. His work was in such high demand during his career that rarely was he personally able to experience a particular  group of work in a series before it shipped out. One series, the Rope Bowls, has never been exhibited before!  In all, 13 different series are represented in this retrospective, dating back to 1984 to his most recent work, Mazorca.

Glass: Is there any chance Billy Morris himself might return to the studio to create more work?
Hawk: Because Bill fully retired in 2007, he will not be attending the show; however, his daughter Jackie was at the opening in person, representing him as not only his daughter but also his new manager. This is the first exhibition that she has undertaken, which greatly adds to the excitement!  It feels like opening night at the theater!  Never say never, but chances are very slim that Bill would ever return to making art again as he sold all of his glassblowing equipment. In his retirement, Bill is presently living the life that inspired the work, with nature as his theme.