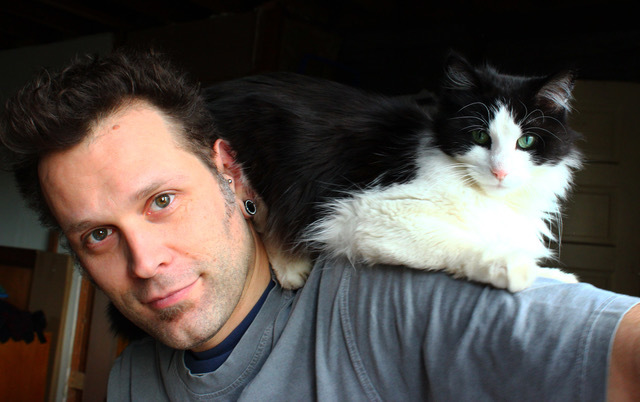 Billed by Traver Gallery as a "surprise exhibition" and presented within a high-end interior residential setting set up within the gallery space, the unique experimental work of Matthew Szösz is on view at the leading Seattle glass gallery through January 9, 2021. The Glass Quarterly Hot Sheet caught up with the Seattle-based artist to discuss the show's German title "Luftschlösser", how his experimental forced-air glassblowing process has evolved, and his newfound embrace of color.

The Glass Quarterly Hot Sheet: I'm always intrigued at the precision of the German vocabulary that has English borrowing terms we don't have -- especially in the realm of psychology and human nature. I understand that the exhibition title "Luftschlosser" can be read as "castles in the air" which is used idiomatically in English for "fantasies" or, perhaps, flawed in some way. "Projects whose success is highly improbable" might be the closest you can get to this sense. Would you mind elaborating a bit on the associations that drew you to this title, as well as how well you speak German -- your thoughts on the language and its subtleties, and why it is better suited than our English closest approximations to evoke the associations with your work and practice?
Matthew Szösz: Unsurprisingly, titling work has always been a bit of an afterthought for me, as evidenced by the series titles, "untitled (inflatable)," etc. This is indicative of the nature of the works, which are essentially the results of ongoing series of experiments rather than ruminations on a subject, or attempts to portray a message. For me the excitement has always been in the learning -- in the trying and failing, and the surprise of success. If the objects are beautiful, I think there is something in their autonomy and in their almost-accidental existence that makes them more so; their status as the valid result of experiment grants them an integrity that allows for the appreciation of what they are without the questioning of the artist’s intent in the choices that made them.

Using a foreign title is a cheap way to add a veneer of mystery and sophistication, and gives a satisfactory sense of superiority to those who take the time to discover the meaning. Obviously, "Luftschlosser” as a title was was suggested by my wife, Anna Mlasowsky [an artist born in Germany]. I never would have know the German idiom, although I am at level “3” in my German lessons on Duolingo. To my sense it suggests a certain subversion- the unreal, possibly the self indulgent -- that adds a winking dubiousness to the overtones of lightness, luxurious, and fantasy that "air palace" might suggest.  Added to the idea that daydreaming is all artists really do, and I thought it was irresistible.

(Growing up in America it is very difficult to hear German spoken without immediately making certain connections -- somewhere between Laurence Olivier in Marathon Man and Col. Klink. I encounter German as a very mechanical language -- where words are bolted together in a practical workaday way, and overall somewhat spare without the conjunctions that grout the English language.)

Glass: One of your first exhibitions of the "Inflatables" was at the Robert Lehman Gallery at UrbanGlass in 2008. It's impressive that you've continued to explore this technique that blends the industrial and the uncertain with such fascinating and evocative results. What can you say about where your decade-plus of research into this phenomenon has taken you? What are some of the key differences about where you've gone with this latest inquiry?
Szösz: I believe that exhibition was "The Space Between," a show of the work of three Wheaton Fellows -- myself,  Edison Osorio-Zapata, and Carine Cheung.

One of the main reasons I experiment as much as I do is to investigate how changing the process used to make things changes the types of forms that get produced.The plates we eat off of are arguably round because of wheel-throwing. Glassblowing produces largely round, hollow objects. New processes that result in new types of forms allow me to daydream about the potential consequences -- they are little windows onto roads not taken, or not taken yet.

Inflating things gave me access to a whole family of forms that arose out of a very different process. I've only been able to explore a small portion of its potential, and I have the sense that it is a flexible process, both physically and aesthetically. This new body of work is a deliberate attempt to explore within the process, and to expand the available territory.

Much of the previous work has been oriented towards mimicking the natural formation of surface tension based forms -- soap bubbles, plankton, jellyfish, cell structure. They primarily used the interior pressure to form spherical bubbles constrained by the pocketed construction of the design. In the newer work, I'm addressing the airflow as more of a linear force -- guiding it through channels and tubes to create pieces that are more of an outline than a volume. These pieces have a mark-making or almost calligraphic quality that combines clear gestures with organic imperfections.

The kiln’s ability to bring a mass of glass evenly to a specific working temperature allows for a far more diverse range shapes, but also removes any opportunity for adjustment - there is a single, precipitous moment of creation. This provides a very different narrative for the inflatable pieces -- instead of careful shaping and working, they are a specific event, a frozen car crash.__________
These pieces benefit from a great deal of painful learning that has allowed me greater control over the shape and detailing, and I doubt that I would have been able to produce  pieces with as much control as these have earlier in my career.

Glass: Your early inflatables were clear, or shaded with the greenish tint of float-glass production. The newer work is striking for its bold chromatic presentations. What are you after with these new hues, and how do they affect the process? Do they require highly specialized glass, color bars, or powders?
Szösz: The colorings and irridescents of the new pieces are a furthering of that idea mentioned above- of exploring in a deliberately different direction. If the earlier work represented my desire to preserve a sense of immediacy and excitement within the work- little or no cold working, working primarily with the raw float glass, and allowing the form to express itself as organically and chaotically as it wanted, the newer work, and particularly the work within this show, represents an attempt to exert much more control over the form and detailing, and I felt that a much more deliberate use of color was appropriate.

They are created using Bullseye’s family of iridescent sheet, which allows them to take advantage of the color change across the length of the tubular pieces, and careful cutting and matching of the glass allows for some really eye-catching transitions that emphasize the forms.

Bullseye produces these iridescent coatings over most of its color range, and the coating over transparent colors in particular allows for a lot of subtle variation in the color and surface of the pieces as light or point of view changes, and the illumination moves from transmitted to reflected. These pieces thrive in natural lighting that changes throughout the day, allowing them to become different pieces at different times.

Glass: In your artist statement, you write about an implicit contradiction in the dual poles of artisanship and anarchy that guide your endeavors: "This is the territory that excites me -- lying between the sensitive and considered restraint of learned technique and the manic populist energy of the rock throwing iconoclast." Do you see your various bodies of work as tacking more towards one or the other of these? And do you need the anarchy to get through the tedium of focused artisanship?

Szösz:The anarchy gets me in to trouble, the hard work and experience gets me out.

I'm mostly motivated to work by fear of shaming myself, so my longstanding method of working is to over-commit to a project and then desperately dig out of the hole I've put myself in.

There is a value to following the contrary or rebellious path- it is a short cut to forcing an artist into unknown territory. The challenge then is to find one’s way back, and bring something comprehensible with you.

Both sides of the coin are required, and this idea of duality, of a meeting of opposites producing something strengthened by their conflict, is fundamental to my attitude towards developing my work.

Glass: How does the background noise of political turmoil, pandemic anxiety, and the general atmosphere of current events influence your work and find expression within it? Do you feel that your work stands apart from contemporary politics and challenges, does it seek a more universal impact, or do you find yourself responding in some ways to the tumult of our times?
Szösz: If we are sincere in changing the attitudes of those we disagree with we must establish common ground with them. History and teenagers everywhere have clearly demonstrated that yelling at people only causes them to harden their position.

Art offers a thinking alternative to the culture of conflict that has been so successfully propagated in our country, to the delight of authoritarians and kleptocrats everywhere.

The making of art, the producing of culture, engages both the maker and the viewer in an intellectual dialog that by its nature is complex, subtle and challenging. Art gives us an opportunity to explore nuance, complexity, and uncertainty.

The creation of art for the sake of the things that it can teach us, rather than as a tool to enforce opinions, is vital to a return to a culture driven by curiosity and learning, which values science, facts, and careful judgement.

I think art can be part of a solution by offering different way of living and thinking about the world than the divided and partisan attitudes we appear consumed with. If we manage to pull out of this, we will need a culture to return to. I would rather work to strengthen that culture than engage and amplify the discord.

Also, I find good artworks created for political ends few and far between.

Glass: Finally, the unavoidable question of how one survives in these challenging times as an artist, especially an independent one -- in that you don't I believe have a faculty position or administrative role to fall back on when the economic moment is especially difficult for artists. How are you managing to survive the pandemic and the economic turbulence in its wake?
Szösz: This year has been an inflection point for me in terms of my career, and I'm still not sure which side of the coin will land facing up. While it has won awards and acclaim, my work has never been commercially successful in the way that it would need to be to support itself. I've supplemented this primarily with teaching, which I thoroughly enjoy. I was fortunate to have the opportunity to teach recently at the University of Hawaii, and in Wroclaw, Poland at the Eugeniuz Geppert Academy. The university setting is much more supportive of the loose experimentation and cross-disciplinary exploration I enjoy engaging in.

It has been an interesting change to stay at home for this long- and there have been benefits- we have been able to take more time for ourselves, and to explore the Cascade range as we have been meaning to. Surprisingly, however, it has proven just as challenging to reserve time in the studio, even though it is just downstairs.

A video tour of the exhibition is available below: