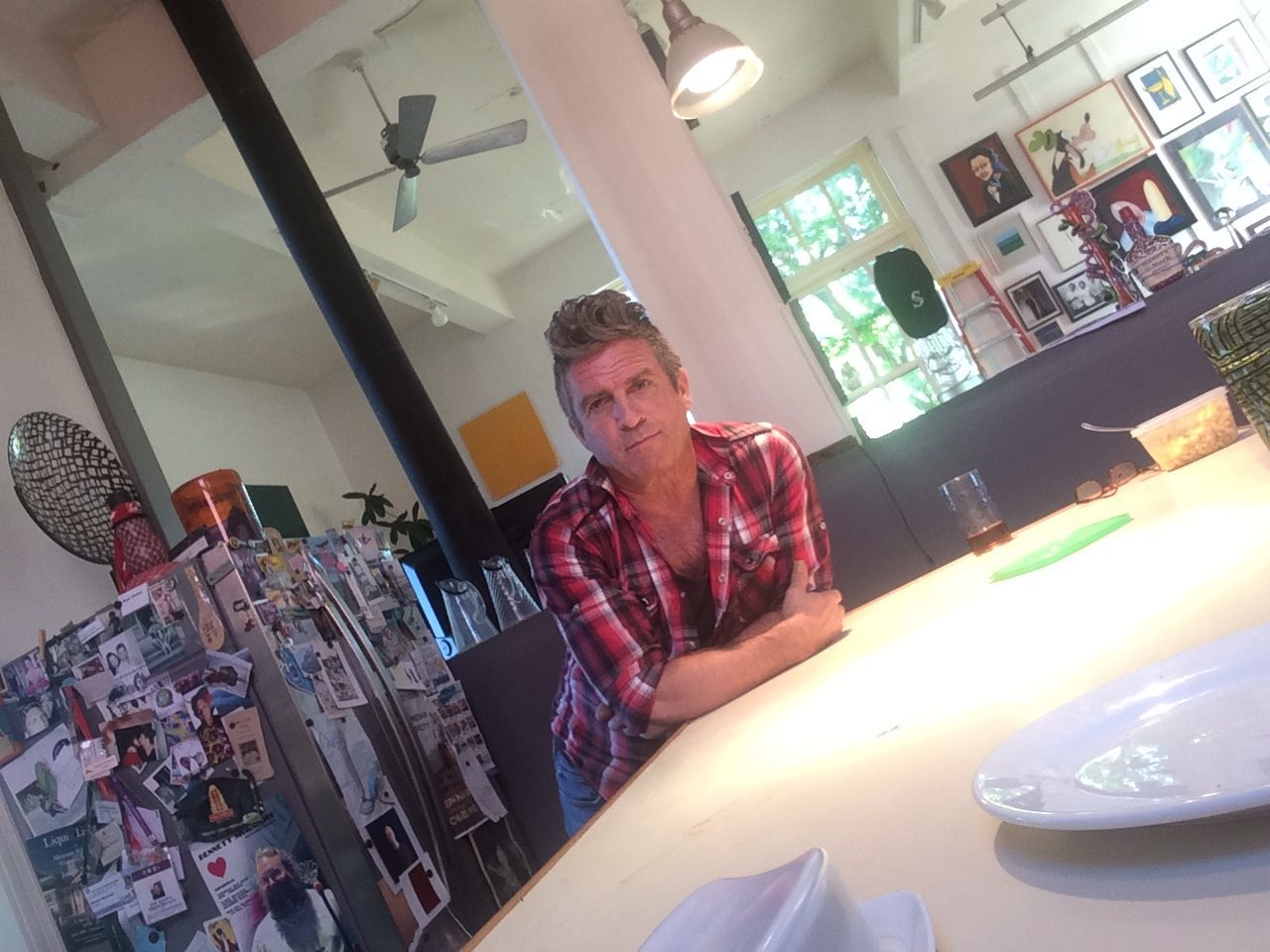 Dante Marioni is widely acknowledged as one of the top virtuoso glassblowers in the U.S., and was perhaps the first American to learn through an informal apprenticeship with Lino Tagliapietra, the Muraese maestro. Marioni has never been content with simple mastery of traditional techniques but has spent his career seeking new ways of applying them. The goal is to make something never before realized in glass, and he's spent past decades locked in a competition to outdo himself. Case in point is the new body of work he developed over the course of the pandemic in which he takes complex cane patterning to a new level. Walking around one of the flattened vessels, each close to three feet in height and perfectly on center, a viewer is entranced by the active shimmering of the intricate canework on the surfaces. Because of the flattening, the vessel's front and back walls are in close proximity to one another, creating a vivid moiré effect that dazzles the eye. The Glass Quarterly Hot Sheet discussed this bold new body of work with Marioni on the eve of his April 9, 2021, exhibition opening at San Francisco's Montague Gallery, where the aptly titled show "Intersections" will remain on view through May 22, 2021. A virtual Zoom opening will take place with the artist present at 12 noon PacificTime (3 PM EST) on Friday, April 9, 2021, which you must register for in advance.

Glass Quarterly Hot Sheet: Some of your early works in the 1990s and early 2000s were really pushing scale and form, but I've noticed how canework is moving front and center to a lot of the pieces you've done since. Would that be accurate?
Dante Marioni: It’s been about 20 years since I began shifting from solid-color form-driven work, and started embracing pattern. Over time it went from the pattern initially being an element to the whole thing being about pattern. In some ways I’ve never really embraced glass qualities, I mean it was something you could blow and transform. I was never about capturing light or any of the things I heard growing up. But now it’s shifted to being entirely about the light, the patterning, and all that stuff.

Glass: It definitely seems the canework has come to the foreground in these new works, but also in ways that are really unique and extraordinary.
Marioni: Yeah, it's about going overboard and making all these patterns and doing so many experiments. It’s technical in that we pull a lot of cane at the studio, and a lot of time is spent next to a chopping machine or using hand-held choppers, as well as just laying out these elaborate maze patterns. All this is done with individual pieces of cane, and it's not random at all. It's about creating that moiré effect, something that is very intentional.

Glass: One thing that seems to have been consistent in your career is how you not only work to master a traditional Venetian technique, but how you intensify it in some ways.
Marioni: Well, you don't ever want to do things that have already been done. I've done a lot of reticello things, that's just a pattern. But what I'm doing now is not inspired by any other glass things. It's not a first, but generally the work is process driven, and inspired by things I see when I'm making something, and also while I'm looking at other glass objects, as well as paintings.

Glass: Was it a glass artist or other type of visual artist that inspired this new series?
Marioni: I've been fascinated by Brice Marden's work, and especially his "Cold Mountain" series, where he used a stick to make these ink lines that borrow from traditional Chinese calligraphy. I've always liked his work and I found that cane can be used in a way that might relate to some of Marden's works. I've started looking at the objects like paintings, the blown glass is really just a canvas

Glass: But there are such technical aspects to the work, though -- I imagine getting the cane picked up just right, to get the flattened vessels to be totally on center as they are -- that's not easy, is it?
Marioni: I don't know. The elements of craft are there; you work to make them symmetrical, do a tidy job of creating the neck and feet. The squeezing has to be done a certain way to create the moire effect. I've been working with Janusz Pozniak for 30 years, and we don't have to plan too much because at this point we're a pretty well-oiled machine. If you're good at glassblowing, you push yourself to do things that are tricky.

Glass: What is the success rate like in a series like this?
Marioni: As we're talking on the phone, I'm staring at a bunch of them now that are off center. The ones that don't make the cut get recycled, but we've gotten to the point where that's down to only about 50-percent.At this point it's rarely from mistakes in the process. It might be some refractory gets stuck in the pattern, a little piece of kiln shelf gets in the mix, or it just doesn’t work -- the pattern is not interesting.

Glass: On the one hand, these shimmering surfaces add dimensionality, but on the other hand, you've flattened them to create that, so there's something interesting going on here, where you're collapsing their three-dimensionality.
Marioni: When I visualize things, I've always done it two-dimensionally. The groups I was doing in the 1990s, the solid-color pitchers and bowls, they were like paper cutouts to me. I saw them against a wall, a viewer wasn't going to walk around it and enjoy the view from the side. Maybe a part of my brain is stuck in the Renaissance, but this is just an extension of that. Flat things are meant to go against a white wall. That's part of the reason why I've titled some of these "Prints."

Glass: Can you share a bit more about process?
Marioni: With cane, you have to be careful with the colors you can use, some are soft and others harder. In the hot shop, the greens and blues tend to get all gooey, but yellow and reds are stiff. Recently, Reichenbach introduced a lead-free blue that is stiffer than any other, which is a game changer. A lot of other blues feel like you could melt them with a Bic lighter they're so full of lead.

Glass: How do you create the patterns that are so complex, intersecting, changing from vertical to horizontal orientation?
Marioni: To make the print pieces, we make a rondel, and then cut and rearrange the pieces. Harvey Littleton was right when he said "technique is cheap," but he was just maybe a little early to put it that way. When you're super into glassblowing, you want to make something that hasn't been done before and do a good job. It's how you remain inspired.

Glass: These pieces are pretty tall at nearly three feet. Is that the upper limit of this process?
Marioni: I'm somewhat limited by my own studio, where I'm confined by the smaller setup. That's just the size that is comfortable for us to work, and I'm sued to doing stuff like that. I'm going up to Pilchuck later this year, where I might explore making larger sizes.

Glass: Finally, how has the pandemic impacted your practice, and what has the past year been like for you?
Marioni: This might sound bizarre but 2020 was actually the best year I've had in a long time. I was the last person to blow glass at the Museum of Glass in Tacoma. The last day they were turning everything off. I told Janusz we'll just keep working and we quarantined together -- this stuff came out of that. I was already making the mazes, but the print pieces came from being stuck in the studio. I staye in my studio, hunkered down and did less recreating than I might normally do. I got inspired.