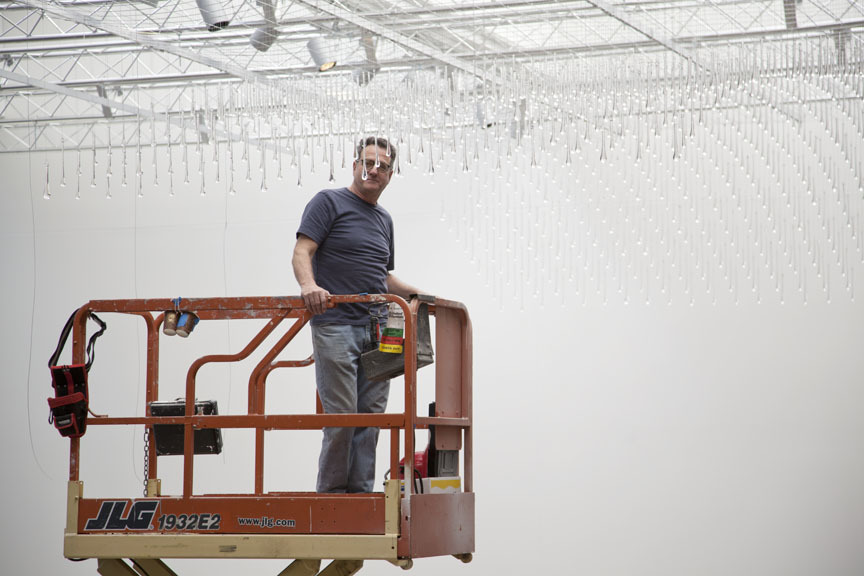 The artist during installation. photo: will howcroft, courtesy massart

Last week, the Massachusetts College of Art in Boston unveiled a public artwork made up of more than 10,000 individual glass droplets. Installed in the atrium of the art college's Design and Media Center on campus, the project was the culmination of an innovative interdisciplinary course taught by independent artist and visiting professor Dan Clayman. A group of MassArt students worked alongside the Providence-based artist to realize this the work entitled Rainfield, which marks the single largest-scale installation realized by Clayman. In an exclusive interview with the GLASS Quarterly Hot Sheet, the artist explains how the project came about and how it was realized.

GLASS Quarterly Hot Sheet: How did this impressive large-scale installation project happen?
Dan Clayman: I had just finished a residency at the Tyler School of Art, and I realized how much I love being part of a department and being with students. I was speaking with James McLeod, a professor at MassArt and a friend, and I asked him if there was anything similar I could do at MassArt. So I taught a senior seminar in the glass department and was asked to give a lecture about my 2014 Dispersion project at Brown University, a public artwork, and Lisa Tung, the director of the college's Bakalar & Paine Galleries attended. She said we've got to do something like that at MassArt. She knew the college was going to need an artwork for the new design center being built on campus and she wanted to find an artwork that would occupy the new atrium, and denote it as a project space. In the Spring of 2015, we made a proposal to do an expanded version of Dispersion, and the college agreed with my proposal. But as I made repeat site visits, and saw how highly trafficked the atrium actually is, I realized that there would be problems doing that project in that space. In order for it to work, we would have had to drill into the floor to tension the wires, and finally someone said we couldn't drill the floor. So I called a meeting and unveiled a different idea. I had worked up a computer rendering of Rainfield, and had also done a mock-up of one square foot of the raindrops. I said I wanted to do this piece instead, which talks about joy and sorrow, and refers to the architecture of the great cathedrals of Europe, that will achieve that sense of wonder when you look up. It also talks about frozen time, as the raindrops are stopped in mid-air. When I was done there was silence in the room for five minutes. They all said it sounds great, we were off to a running start.

GLASS: Did the new plan change the budget for the project?
Clayman: We had a very small budget established for Dispersion, and Rainfield couldn't go over that. We had a budget to augment what was already made for the Brown installation, to make it bigger and taller, and we were locked into that figure. 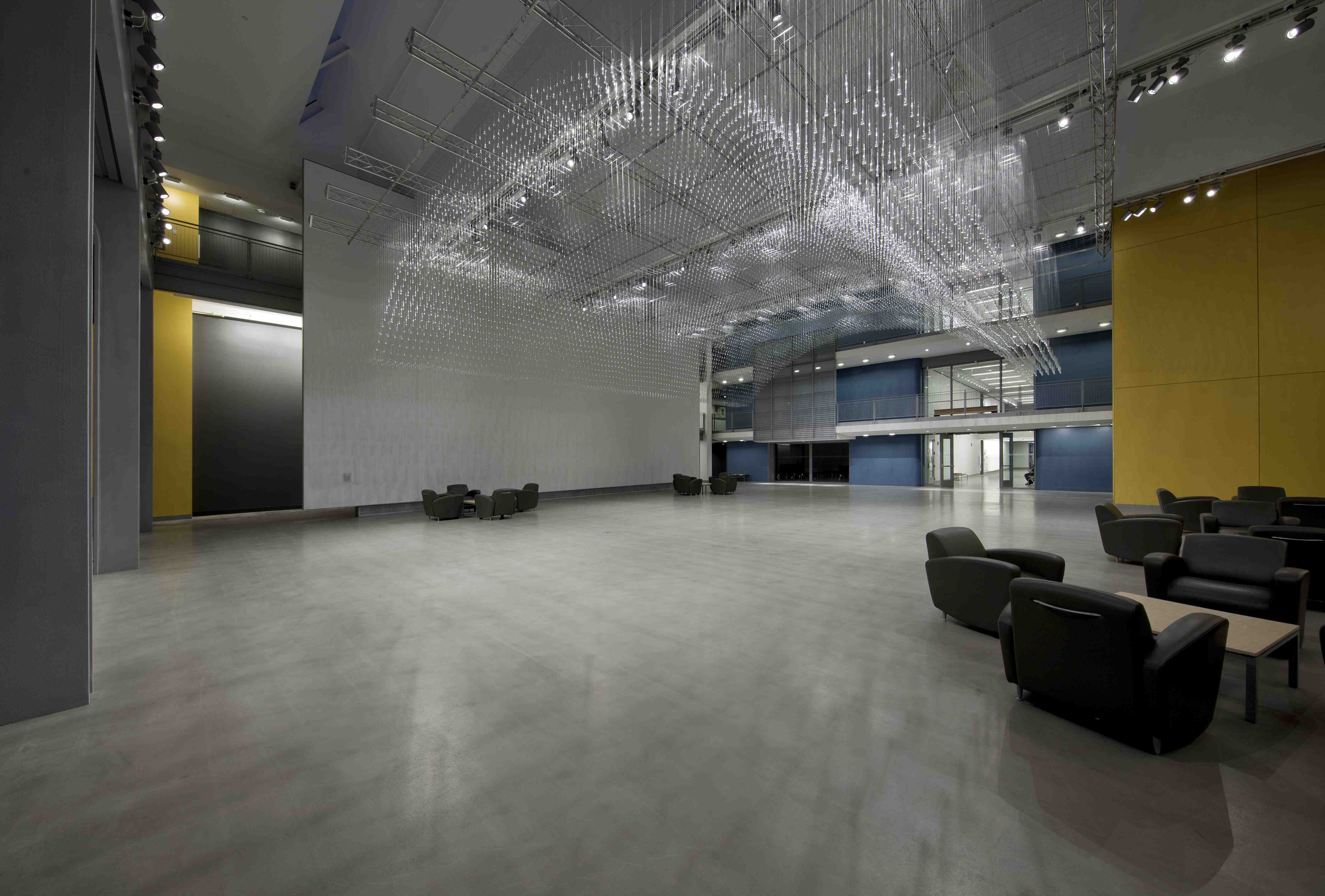 GLASS: How did this become a course at MassArt?
Clayman: Lisa had always thought to do it as an interdisciplinary class, and 17 people had already signed up for it when we were still planning to make Dispersion. We had to change gears and explain to everyone that we were now going to make this Rainfield thing, and the MassArt hotshop is going to be primarily responsible for fabricating these raindrops. We started on September 5th, 2016, the day after Labor Day, and we had five or six days with five students coming in on some days and eight on others. We thought we'd be able to make 5,000 drops in that time, but the learning curve was steeper than we thought, so we ended up making only 2,000 that week.

GLASS: So how did you balance the hands-on fabrication and the instruction?
Clayman: It was a five-hour class on Mondays. The first three hours was working on Rainfield, the last two would be more of a formal class about how you do an installation. We had James Carpenter talk to the students via Skype, as did Martin Blank. I also brought in my lawyer who did the contract, representatives from MassArt facilities, the project engineer. I wanted to expose the students to every step of the process, and I'd update them on our progress and the problems that came up, as well as how I'd be working around them.

GLASS: Were you able to make all 10,000 of the drops at MassArt's hot shop?
Clayman: They were all made at MassArt, and at three different studios. Ed Branson, an old friend of mine with a studio in Ashfield, Massachusetts, made 400 raindrops with me. And Jim Watkins and Liz Pannel of PW glass in Providence made hundreds of them there before MassArt was totally dialed in. The Worcester Craft Center allowed me to come in for two days and make them. And the Pittsburgh Glass Center's Becky Smith got a crew together and made 400 for me. 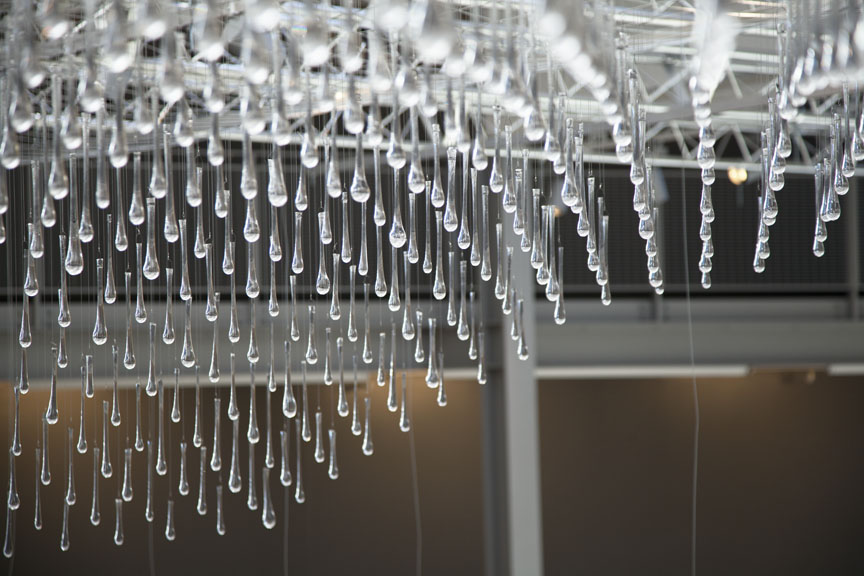 GLASS: Did they all use the same type of glass or is there variation?
Clayman: Between all the studios, there are three different kinds of clear glass each with a different refraction index. We made about 8,500 at MassArt where they use System 96. The remaining 1,500 were made in a combination of Glasma from Europe, which has a higher refractive index and a little bit of blue that gives it a prismatic effect when you turn your head. The other thing is that each drop reflects the whole atrium, so when you look at them up there, on the manlift we were using to install them, there are 100-million images of raindrops up above your head. That's 10,000 raindrops times 10,000 reflective images -- while you don't see all the reflections from the ground, the visual information is there in every one of the drops.

GLASS: Did the students also participate in the actual install -- the stringing of the drops high above the ground?
Clayman: Yes, everybody banded together to make this happen. The students all had to be safety trained in the correct procedures with the manlift so the administration felt comfortable having the students go 25-feet in the air to work on this.

GLASS: Did anybody get injured?
Clayman: The only injury was yours truly. I managed to cut myself with a pair of scissors, not recognizing I had my finger in the scissors when I was snipping a zip tie. But we took precautions. We worked slow and steady. We never worked late as that's when you begin to hurt yourself. Not only did the students have to adhere to the rules at school, the first day, each of them had to sign a safety contract with me. And I told them, if I even suspect you are under the influence of drugs or alcohol, I'll be asking you to leave. Every step was very strict.

GLASS: Talk a bit about the inspiration to create Rainfield -- I understand it is your response to getting caught in a sudden downpour.
Clayman: It was early April, the first warmish day in Providence, and I got caught in the rain. I was thinking how I love to be in the rain, which brings up very specific memories because the house I grew up in had a copper roof just below and to this day, if I'm in a tent or home on a rainy day, I love that beautiful sound and that ozone smell that comes after a rainstorm. But I also began thinking about the great cathedrals in France. When my wife, Terry, and I walked into the cathedral at Chartres, I wanted to recreate that moment of what big architecture can do. When the piece opened I hid myself and watched people go into the space. Their eyes go up, their mouths open, and that's what the project is all about.