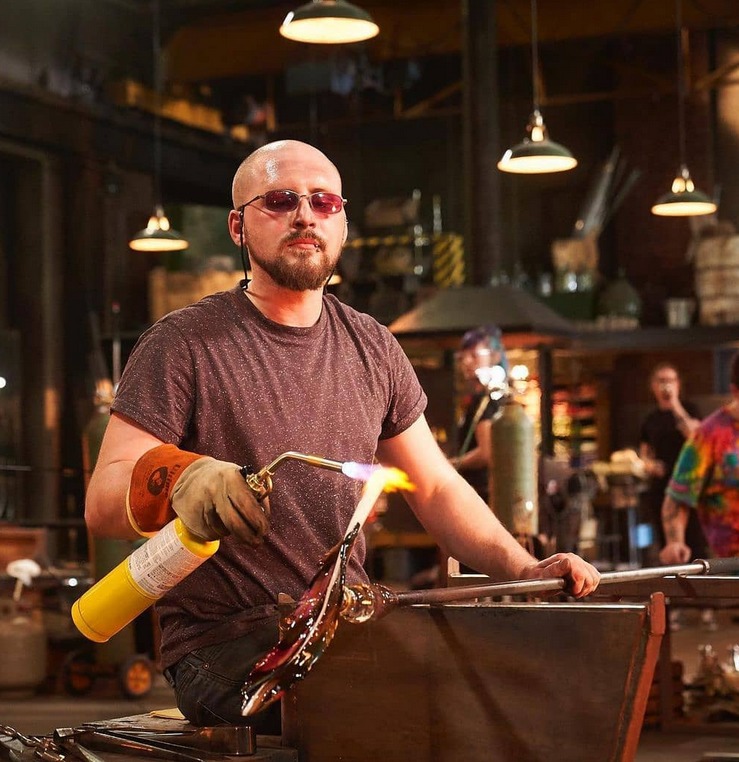 Elliot Walker was the unexpected champion of the second season of Neflix's Blown Away. The combination of technical accomplishment and creativity in his glass sculptures, rounded off by quirky titles (Cogito Ergo Sum, Mr Noteworthy, Bodge Job), proved to be a winning one. He has just exhibited at Collect 2021 and is due to take up a residency at The Corning Museum of Glass, part of the prize for winning Blown Away, when circumstances permit. Walker currently works from a studio in Hertford, England, with his girlfriend and fellow glass artist, Bethany Wood. Below are some excerpts from the interview which he gave to Emma Park, Glass Quarterly's European correspondent, who is at work on a full-length feature on Walker as an artist and on his place in British contemporary glass, for an article that will appear in the forthcoming Summer 2021 print edition of Glass (#163), on newsstands June 1.

Glass: The UrbanGlass Art Quarterly: You were the only person with no prior connection to North America on Blown Away. What did that feel like?
Elliot Walker: It was fun for me. It wasn’t what I was expecting, I thought that this time they might do more of a global thing. You know, I was expecting someone from the Czech Republic at least and someone from Italy, but maybe that’s for the next one.

Glass: What did you learn from doing Blown Away?
Walker: I was reluctant to do it in the first place… I’ve never seen glass as something to do competitively – it doesn’t make any sense to me. I never really watched anything like that, I wasn’t into the format… I knew it was a good thing for everyone, it was great to see it on TV,  but I never really thought, "Oh I want to do that." I was reluctant to put myself in that situation, and, as well, I was having my furnace delivered. I’d just bought it, it was going to be delivered the week we’d have to go… There was so much going on here at the time that I just thought, I can’t afford to do this. Because it is a big risk to take. You don’t get paid for it, you’re taken
away from your work for possibly seven weeks, and that was just terrifying… Bethany [Wood] convinced me in the end to apply, and I’m so glad I did. I don’t know what would have happened if I hadn’t won. It would have been a completely different feeling and story about it then, but the fact that I won it has literally saved both of us from ruin over the pandemic.

Glass: Was the timekeeping in the episodes as rigorous as it appears?
Walker: It was really rigorous, and it was really intense. And having the evening [before each episode] to plan was absolutely vital, but still, it was not long enough. So there’s a lot of frantic start-up, and you have to explain your concept and your idea, and all the different moves to assistants straight away, and that takes up time, you have to plan your coloring, and everything like that. It was pretty bonkers. It’s not the way to work.

Glass: How many days did you have between episodes?
Walker: Each one took about four days. Every day there was something related to the show. We had two days off in the whole period, and those two days – it was the half-way point…and that’s when they actually advised us to start thinking about the final thing, so
everyone started planning. It was seriously intense, the whole thing, because there was something every day, and you couldn’t ever relax, because you’d be whisked off to the thing to do an interview, the cold-working was a thing, the installation…

Glass: What was the worst disaster that happened to you?
Walker: I got away really lucky, to be honest. I broke the lungs [in episode 1] –– which was really awful, so I had to glue those back together. I just whacked it on something – so easy to do. So that was quite bad.

Glass: Was there any particular guest judge that interested you?
Walker: I didn’t know anyone, really, apart from Deborah [Czeresko] and Alexander [Rosenberg], who were on the previous series –– I didn’t know who anyone was. Absolutely no idea. And every time they asked me this, “What did you think about the judge?” and I’d
just say, “Sorry,” – I didn’t have a clue who it was. I was educated on who they were afterwards. Not being in that world, a lot of the people who were in the glass scene were very well-known in the States, but unless you’ve ever been there or really looked into it, you’re never going to know who they are. And then the people — Bobby Berk, I’ve never seen that show, so I didn’t know who he was. But everyone was really excited when he came on. He was really nice, a friendly guy, as much as he could be really.

Glass: Did you have a chance to talk to the other competitors at any point, during or after?
Walker: Constantly. That was the best thing about it. I didn’t know who anyone was, but Nao [Yamamoto] and Tegan [Hamilton] had actually worked together, everyone knew who Chris [Taylor] was, Mike Shelbo, and Cat [Burns], they’re all quite well regarded and known in their field. I think everyone was a little bit nervous about how everyone else would be, but they were all brilliant, so supportive, and great fun to hang around with. We were out every night together. We were properly socialising – way too much, at some points!

Glass: How has Blown Away helped your career?
Walker: It’s too early to tell, really. Being in the U.K. rather than in the States is going to alter it. It’s not a massive show here.

Glass: Has there been much of an increase in sales of your works since then?
Walker: Yeah – so that has been the biggest change. That’s been more than I ever expected
or planned for.

Glass: How much of a difference has there been?
Walker: A million per cent. I’m always making work to do a show or to put into a gallery or something, that’s how I make half of my money, by selling work…I’ve had collector groups who’ve been following my career for a long time, never spoke to me before, get in touch, give me all this advice, and say that what we’re doing now, what me and Beth are doing now, mostly Bethany, in the way we’re presenting these works, is the path to the future for us in our careers. We’ve made five years’ progress. We would have built it up anyway, because that’s what you have to do, but we’ve skipped five years by doing the show and having that
exposure, which is just amazing.