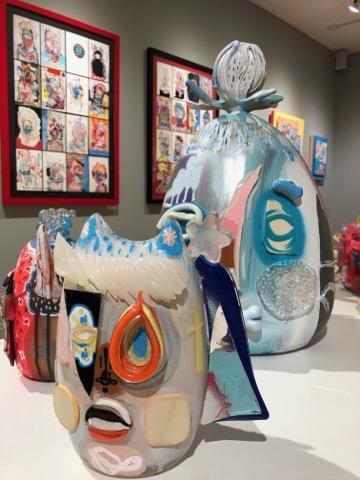 Alex Krueger, a Chicago-based educator and mixed-media artist, is opening his first solo show at Vertical Gallery, where the exhibition entitled "Cadaver one" will remain on view through March 27, 2021. Though he uses a handle -- "AKA Crop" -- he is not a pipemaker, instead blowing and hotworking his glass sculptures at the furnace before adding to them with acrylic paints. His alias is a relatively new development that came about when Krueger submitted to a sticker competition at Vertical and wanted to remain anonymous during the judging (he got into the show and is now represented as a gallery artist). Vertical Gallery shows an international roster of Street Artists, a term that is used to try and capture various modes of expressive resistance to the prevailing culture that encompasses graffiti and mural-making among other approaches. This type of artwork has an uneasy relationship to the contemporary art gallery scene (see Banksy, Basquiat, et al), though it is a growing sub-niche of the Outsider Art field. The Glass Quarterly Hot Sheet recently caught up with Krueger to talk about his unique approach to adding paint to the glass objects he creates.

Glass Quarterly Hot Sheet: One of the unique things about your work is that it has this raw edge, but unlike other so-called "outsider artists" using glass, you are not working with found objects but actually have the skills and access to make your own glass. How did you learn how to blow glass, and how does it fit into your story?
Alex Krueger: I was introduced to glass as a teenager, when I first met Pearl J. Dick at Chicago Hot Glass. Watching her creating these big sculpted heads, I was just taken with what you could do with the material. I had an opportunity to study glass at Bowling Green under Scott Darlington, which allowed me to go to college. I didn't graduate but took an opportunity to work in glass production, which I did for some years in Seattle at places like Seattle Glassblowing and Glassybaby. I saw it as a job-oriented thing, a way to build independence. It also made sense because I was always interested in subcultures such as graffiti, punk rock, hip-hop, and pipe-making, but only to a limited extent.

In Seattle, I felt like a lot of people were making things for other people, but were having a hard time developing their own voices.  I was determined to avoid that so I continued to paint and draw as counterpoints to glass due to their relative simplicity. It was just a natural progression to combine the two. I did get a lot of eye rolls, people telling me you can't do that type of thing, the glass community doesn't always appreciate nontraditional approaches, but I found a personal revolt from all that within the Street Art scene, where people were more encouraging for my experiments in this way of approaching glass as a canvas for painting.

Glass: What brought you to Chicago?
Krueger: I moved to Chicago in the summer of 2012 to help start up a new glass studio here with Pearl. It didn't pan out as a place conducive to creativity in the way I had hoped, but the silver lining was the move to Chicago allowed me to develop my career. I went back to Chicago Hot Glass, where I was able to teach and rent a studio space. I also found a newly launched gallery called Paper Crown that was interested in my painting and drawing, and so I stayed around Chicago, where I'm originally from.

Glass: How is Chicago different from Seattle for an artist who works with glass?
Krueger: There isn't an infrastructure for someone to get plugged into the making model -- there's no UrbanGlass, here. It's a little more wild wild west, sink or swim, with the only opportunities the ones you cultivate. Paper Crown Gallery started to see the glass I was making and were interested in how I was experimenting using it as a 3-D canvas, and were able to sell some of that stuff. I was taking the highly-skilled material of glass and adding to it from my more unorthodox but deeply intuitive painting techniques, playing with the push and pull between those.

Glass: How do you plan out the glass making, and the second-stage of the painting process?
Krueger: I basically put my head down and made so much stuff. I almost have panic attacks when I have to make work for a show, and I stopped at a certain point and realized, it's okay, I actually have a lot to work with for the show. I paint with acrylic, sometimes I also use spray-paint, pen, ink, and pencil. Also, some low-firing enamel.

Glass: I see your work connecting to some famous Art Brut artists such as Jean Dubuffet in a sort of raw energy and subject matter. Who are some of your influences. Do you look at work from other artists using glass?
Krueger: Therman Statom, the De la Torre brothers, Judith Schaechter are a few of the people whose glass artwork I watch. But I also work as an educator at Pearl's nonprofit Firebird Community Arts project. I think about what I do as an educator, about developing ways of working that reflect the reality I share with my students that many people have only a short opportunity to work with glass, how to find a long-term model for making art.

Glass: What role or function does the glass aspect of your work play?
Krueger: I've always looked at the the glass pieces as three dimensional canvases, or silhouettes, these days. What I make flows from a certain improvisation in the stdio, and I work with a lot of different skill sets as far as assistants go, so it's very loose in terms of what we can accomplish. I always know that it will be something figurative, but I'm not rigid. I want a form that I can work off of, adding more hot-sculpted parts that later get assembled on hot or cold. It’s all kind of a response to what’s happening in real time in the shop.

Glass: Where do you teach?
Krueger: I am one of the educator's at Project Fire, a program of Pearl's to use glass art as a way to help heal trauma for Chicago area youth. I've been with Firebird Community Arts since I left teaching at Little Black Pearl, an arts-based high-school where I worked until May 2018.

Glass: Many of your works in glass have titles that are first names. What is the significance of the titles?
Krueger: All the titles are names of people and, in some cases, animals who have been a part of my life in some way, shape, or form. The sculptures are loose interpretations of that individuals. I’m interested in the "uncivil" parts of the human condition, by which I mean people's addictions, their mentalities. I want my work to get closer to the truth and honesty of the individual as I'm not too into facades. One work is about someone I knew who developed schizophrenia in the mid-2000s and I used this rough mosaic process, with multiple eyes, to try to get to what it was like for him dealing with that.

All the works have to do with people that I’ve had connections with. I hang out at emergent galleries and I'm most interested in unauthored art. Music is a big player in my work, and I'm also influenced by the deep Chicago working-class aesthetic. Project Fire is also a working-class type of space. There are a lot of other types of things on top of it. I'm fired up by the youth that I work with for not being beaten down by the realities of life. Also, my peers. I’m inspired by the people I work with, I'm into the Punk culture in music and in people , appreciate the aggressive as I find it can be more truthful in its raw emotion. Untethered, it’s just there. You feel there is no curation of that, it’s a raw form of emotion, and I guess that’s why I think it's true. It’s really easy to talk around something. I'm looking for the opposite.

Glass: Is the title of your show, "Cadaver one," referencing the pandemic in any way?
Krueger: No, the name of the show is not a direct response to the pandemic, but I do think it accelerated the rate of reflection of our own mortality. I'm not making a commentary directly on the loss of lives, but if someone interprets it that way, it's fine. I was thinking of it more as a reminder of our own mortality.

Glass: A lot of outsider artists don’t have access to the production of glass, but you do -- perhaps that's one reason your work has such a unique feel to it. Would you agree?
Krueger: Glass can be exclusionary and exclusive because only certain people have access to it. Ad you're relying on having access to the studio space. Painting brings in other types of making and the artist is not just using that elite space. As an educator, I'm always asking, how do we create a long-game for artists who we work with instead of becoming hyper-reliant on the culture of making in the hotshop?