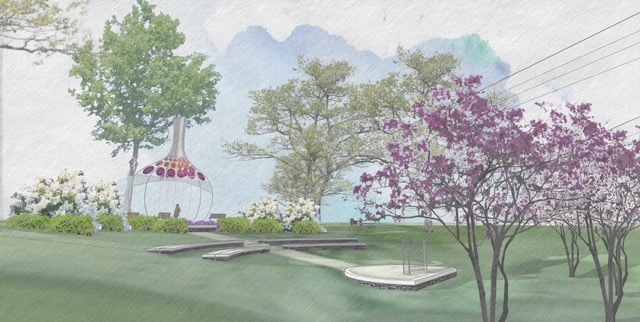 Brook White, a former student of Stephen Rolfe Powell (1951 - 2019) at Centre College in Danville, Kentucky, was looking for some closure after the sudden death of his teacher and mentor in 2019, when the idea hit him one day in the studio. "I wanted to do one last Steve project in true Steve fashion," says White, who is the owner of Flame Run Glass Studio in Louisville, Kentucky. After graduating, White worked for Powell for a decade, and can rattle off a number of "Steve ideas" that might have sounded unattainable or unwise when first proposed, but would turn out to be epic adventures that usually worked out. Take the story of the time Powell bought a 40-acre farm, and decided one day that the pond should have a massive sand beach. The two tractor trailers delivering his sand order weren't able to get close to the muddy pond, so dumped their tonnage 30 yards from the water's edge. The solution? Powell directed White to the shed where there were shovels and wheelbarrows they all used to move the mountain of sand.

One of his most audacious ideas? To invite the internationally renowned glass maestro Lino Tagliapietra, who he admired but didn't know well, to visit the tiny liberal-arts college and to watch the Kentucky Derby.

As the one-year anniversary of Powell's death approached, someone at White's crew at Flame Run asked out loud if there was a headstone for Powell, and White realized that, because he'd been cremated, there was no memorial. Thinking about that led him to the idea of a tribute sculpture on the campus of Centre College, itself. With the permission of Powell's widow, Shelly, White reached out to the college administration, and got the green light, and a prime location. The project will be a sculpture, a garden, and an outdoor classroom area.

White got right to planning and fundraising, eventually bringing in close to a half-million dollars through his and others' hard work.

At 25-feet in height, the sculpture is on a scale that White says matches the man who it memorializes. At one point the contractor was worried about whether they could pull this off but White shut that conversation down right away. "You can't scale it down, or taper it down in some way," he said. When asked what Powell would have said about it if he had seen it, he answered, "It should have been bigger! Why did you only go to 25 feet?" An illuminated circle at the base of the sculpture will feature some shards of some of Powell's own works.

The memorial will be officially unveiled on October 15, 2022, during a ceremony at Centre College.

For those looking to donate in support of a maintenance fund for the Stephen Powell Sculpture Garden, contact Kelly Knetsche, Centre College's vice president of development, at Kelly.knetsche@centre.edu, or by phone at 859-238-5513.