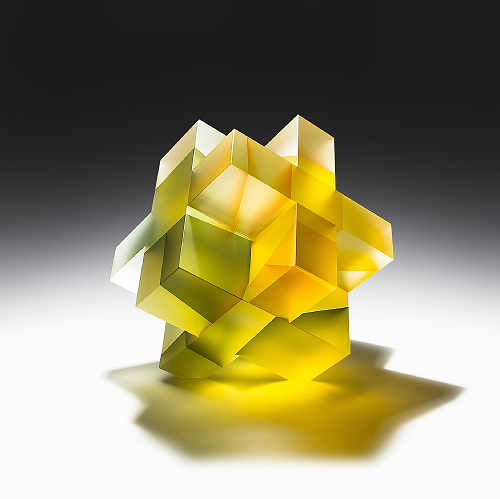 During his residency, Jiyong Lee, professor of art at Southern Illinois University in Carbondale, Illinois will explore new forms in the hot shop and coldworking studios that can be used to expand his “Segmentation” series.

Driven by her fascination with the history of glass seed beeds, Raghvi Bhatia will explore how they serve as units of time, violence, labor and faith.

Erica Rosenfeld, whose labor-intensive work is often composed of several parts, will spend her time making components based on mid-century traditions to be used in future work.

Dan Friday is a Seattle-based artist with Coast Salish heritage, which he often depicts elements of in his work. As part of a residency at the Burke Museum, he conducted research of fishing artifacts of the Coast Salish tribes of Puget Sound, which he plans to expand upon during this residency.

Lauren Kalman is the first recipient of The Burke Residency, a partnership between The Studio and the Museum of Arts and Design (MAD) in New York City. The residency is awarded to one of MAD’s Burke Prize finalists in order to enable them to further their artistic exploration with glass.

Named for craft collectors and MAD supporters Marian and Russell Burke, The Burke Prize is a juried award of $50,000 made to a professional artist aged 45 or under working in glass, fiber, clay, metal, or wood. An exhibition of works by the 2019 Burke Prize finalists, including Lauren Kalman, is on display at MAD until April 12.

According to MAD’s website, the Burke Prize was established to “[reinforce] the Museum’s commitment to celebrating the next generation of artists working in and advancing the disciplines that shaped the American studio craft movement.” Furthering that goal, Director of The Studio Amy Schwartz explains in the announcement on the Corning museum's blog that Kalman was chosen for the Burke Residency this year because “she is just starting to dip her toe into glass, and we want to foster her curiosity and creativity in this new medium.” During this residency, the Detroit-based artist will be exploring how glass can be incorporated into her work representing voids.

Cat Burns will also be in residence during the month of May, and will dedicate her time to creating visually bold work referencing the frustration of losing one’s eyesight, as she slowly is losing her own.

Emilio Santini and Tomo Sakai will be working collaboratively as part of the Instructor Collaborative Residency, a shorter residency offered to an instructor who has taught winter or summer intensive classes at The Studio that allows them to create a new series of work with another glassmaker of their choice. Santini and Sakai will be using their skills in flameworking and coldworking, respectively, to create work that brings together each artist’s recent interest in incorporating the other skill set into their individual work.

Sibylle Peretti and Austin Stern will both be exploring the addition of new elements to their future work during their residencies. Peretti’s focus will be on researching the history and formulation of gold ruby glass, while Stern will create new sculptures with mixed media components.

Japanese artist Yukiko Sugano plans to create two-dimensional works with fused glass stringers. Danish artist Stine Bidstrup will be creating work with interchanging layers of opacity and transparency to continue exploring optical phenomena and the properties of color in glass.

The David Whitehouse Research Residents will spend up to 3 weeks exploring the museum’s permanent collections and conducting research at the Rakow Research Library to inform their artistic practices or scholarly research.

The artists will both be researching glass objects from earlier centuries and the techniques used to make them. Phoebe Stubbs delving into refractory telescopes from the 17th and 18th centuries, while David Nasca will examine the realistic flameworked glass models of sea specimen made by Rudolf and Leopold Blaschka in the 19th century.

Melania Ruiz Sanz de Bremond will study the history of glass production and usage in Spain and Latin America, while Karime Castillo will compare archaeological glass from Mexico and early modern European glass to expand upon her existing research on the influence that cultural exchange had on colonial glass production.

The dates of the 2020 residencies are: